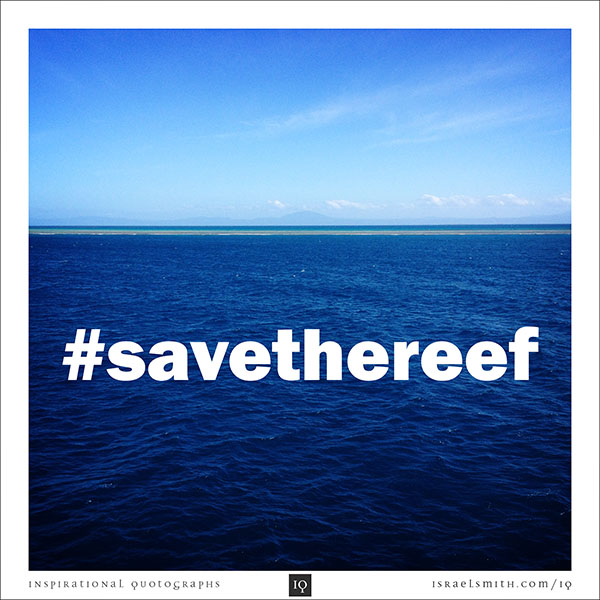 Today’s IQ is not actually an Inspirational Quotograph per se, but more a statement about a topic that hurts my heart.

I am a highly sensitive person. I feel things very deeply, and get affected by things more than the average person.

The state of the environment has been a deep concern of mine for many years, but particularly since my daughter was about 18 months old. I had a moment, sitting on the beach at Coogee, where I realised that if the climate continued to change at its current rate, rising sea levels would have put me about three metres underwater. In itself, this was a pretty upsetting realisation. Viewing it through the lens my daughter’s future enjoyment of the beach her parents were married on, I immediately realised I had to do something.

I found myself quickly immersing myself in research and actions related to minimising my household’s carbon footprint. This urgency and fervour intensified for a few years, until the Copenhagen Climate Change Conference five years ago, in late 2009. A resolution was not achieved, the leaders of our country slowly abandoned urgent climate action as a policy objective, and I silently despaired.

The years since 2010 have been consumed with my quest for personal health and fitness, my son’s birth, my own struggle with a deep depression, the aftermath of and recovery from my depression, and the subsequent re-engineering of my business. My new family objective to travel the country, and pursue deep change in children’s health, is my main focus.

However, throughout this time, I’ve oscillated between deep concern and deep despair for the gradually declining state of the environment. Our government’s generally flaccid response to the issue took a positive turn when the Carbon Tax and various Climate-related agencies were established and strengthened. Until, that is, our current Abbott government decided to undo all the positives, and take us into the environmental dark-ages.

Why the environmental ranting?

I have just finished watching this piece on ABC’s 4 Corners program. It is a deep investigative journalism story into the current plans to dredge and dump 5 million tonnes of seabed into the Great Barrier Reef Marine Park.

The most damning assessment of our treatment of the planet is contained in the comment by Dr Charlie Veron – former Chief Scientist of the Australian Institute of Marine Science – toward the end of the piece, when he states that he would rather have died earlier, than witness the degradation and deterioration of the coral reefs, that he has witnessed in his lifetime, and is witnessing now.

I am reminded of a song called “Monsters” by Something For Kate – one of my favourite Australian bands – where the lyric goes something like:

It’s kind of how I feel, when I consider the overall picture of our environment, and the countless short-sighted decisions that we each continue to make each day that harm our planet.

This TV program tonight served to educate me to the actual scientific opinions behind the Abbott Point plans, but it also served to hurt my heart deeply about the likelihood of my children enjoying a rich and abundant planet when they are my age or older.

I could easily write five times as much as I have about this topic. I have so many thoughts flying through my mind, but for now I will settle on three requests for you:

1) Please watch the 4 Corners piece titled “Battle for the Reef“.

2) Watch this video by GetUp, and check out these other sites by Greenpeace, and the Australian Marine Conservation Society.

3) Do EVERYTHING in your power to make sustainable environmental choices, as often as you can.

That’s all for now, before my heart explodes.

PS The image for today’s quote is a long-distance iPhone shot of the reef, taken from the outer-reef tour boat I went on last week while in Cairns. I don’t have an underwater camera, and I was so intent on soaking up the experience as much as I could, that I left my camera in my bag for most of the day. Hence the long-distance shot, with the barely-discernible reef in the background. </disclaimer>