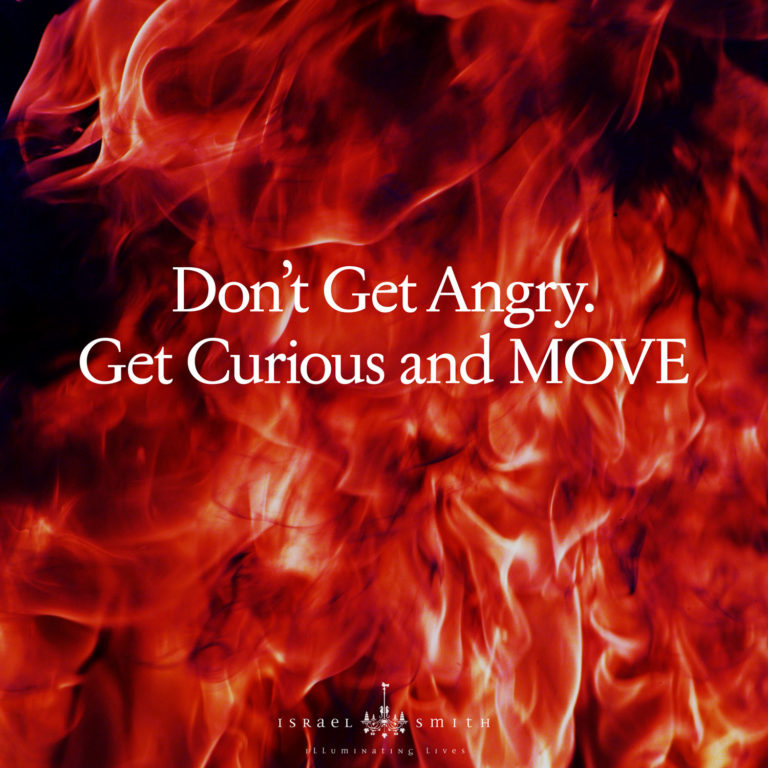 Don’t Get Angry. Get Curious and MOVE

I want to talk about anger.

I have been – for most of my adult life – an angry man:

During a coaching session a while back, as I explored this pattern of anger in my life, my coach said to me:

“You can’t heal something, until you accept it. Do you accept that you are an angry man?”

Ouch. It truly felt like a gut punch, but it was delivered with love. And I really reflected on that question in that session. There and then I realised I had been resisting my anger and in denial that I even was angry, because of my own experience as a kid.

I was raised by an angry father, and an angry step-father. I learned from them that when I was confronted, or challenged, or fearful about anything, I should respond with anger. That is, out of the “fight/flight/freeze” response, I learned to default to “Fight”.

Both my Dads had their own reasons for being angry, and I hold no ill feelings toward either of them about it… but it is my truth about how I was raised.

I knew in that moment with my coach that, no matter how uncomfortable it felt, the only way out of this lesson was through. I had to face my anger, accept it as a part of who I am, and accept that I have been an angry man for most of my life.

Since then I’ve been learning lots about my anger; what causes it, how it shows up, what I can do to move/shift/clear it, and how to notice it early enough to intercept it before it spills out and impacts other people. I’ve also been working to relocate it, so it is no longer part of my identity.

Here’s what I have learned.

Anger is a completely valid, common emotion to feel and express. BUT – and this is the kicker – it is NOT OK to express it in a way that harms others.

Now that may seem like a BFO (Blinding Flash of the Obvious) to you, and it was to me too. Obviously it’s NOT OK to harm others with our emotions. However, having it so clearly stated really helped me, by establishing a clear boundary to work with.

So, boundaries set, I started exploring my anger… and this is where curiosity comes in:

These are some of the questions I have been asking myself – getting curious about – and it’s been insightful, to say the least.

Turns out that most of the time (all of the time?) my anger is about unmet expectations. That is, I expect that the world “should” be a certain way, and I get angry when it doesn’t meet my expectations. (See above, for basically my entire list of things I have been angry about.)

For instance, getting angry with my kids when they don’t behave in a certain way in a certain context. Getting frustrated (another name for angry) when work doesn’t go the way I want. Getting angry when I’m playing basketball when the ref makes a bad call, or I miss a shot, or the players on the other team play better/rougher/harder than me. (These are all examples from the past 7 days…!)

In every case, our emotions are indicators, signposts to show us what we need to work on.

My anger can show me where my actions are out of alignment with my values. Sometimes, my anger is related to judgement – I’m judging someone, or reacting to being judged.

No matter what the CAUSE of the anger is, or what it is here to teach me, there are 2 things I know to be true in EVERY case of my anger:

So what do YOU think about all this?

Do you get angry often? Does it show up in unexpected places, or get stuck in your body? Are you like the old me: in denial about your anger, and unwilling to accept that it’s part of you?

I’ve been learning to be more present in my body and in my CHOICES when I feel myself getting angry. I remind myself I can choose to be calm, to respond, to speak softly and peacefully – even when parts of me want to yell, scream, rage, get nasty, etc.

Managing anger, like everything, is a practice, and it gets easier with time. But being present in my body, learning to recognise the early warning signs of anger rising, and learning to defuse by getting curious and moving my body, have been SO helpful to me as I learn to be a better human and live a more Illuminating Life.

I’d LOVE to hear from you on this. What makes you angry? What do you think it might be trying to teach you? How can you use my learnings to improve how you manage your own emotions and anger this week?

Keep all this in mind as you move through the next week, and hit Reply and tell me what you learned or what you thought/felt about this post.

With love and gratitude,
Israel. xo