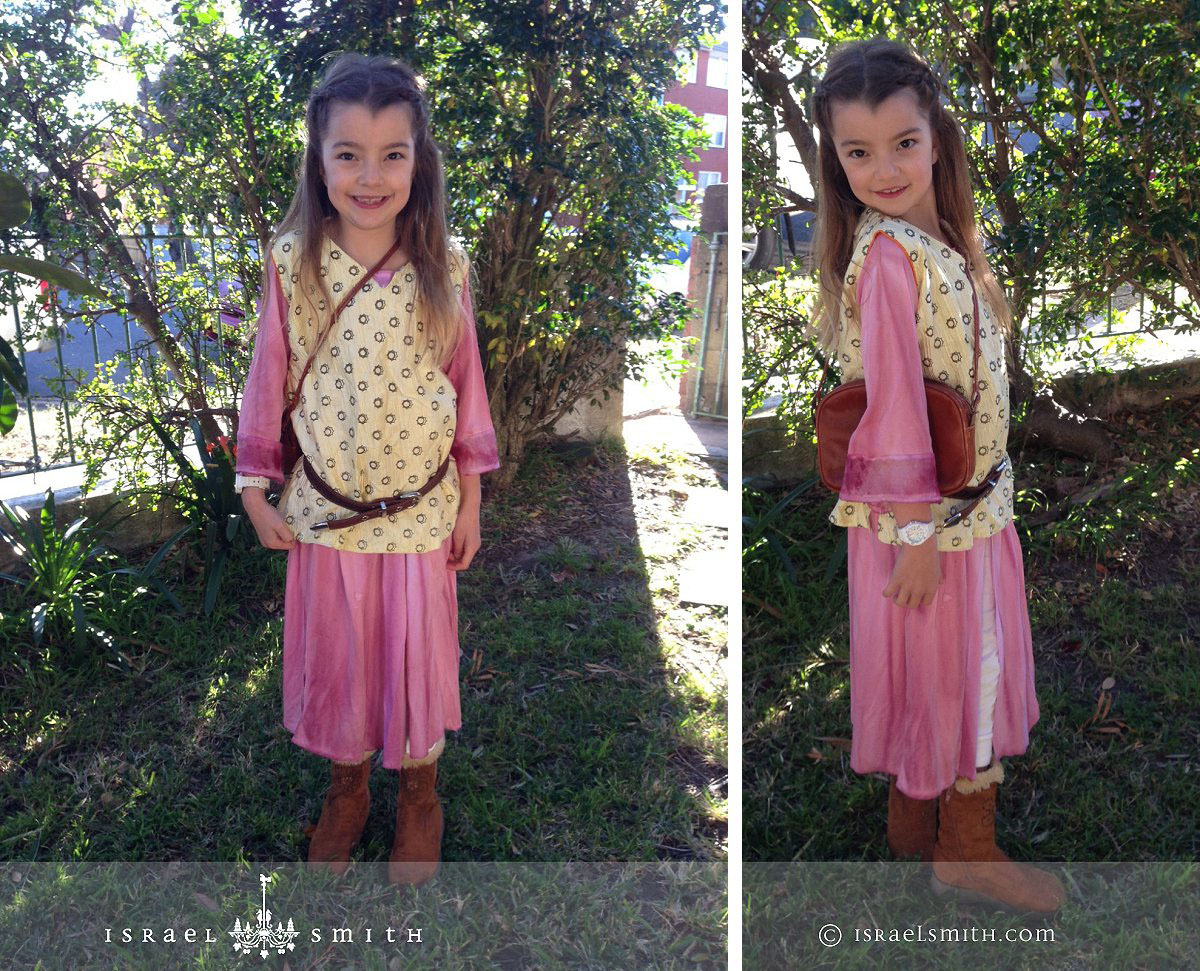 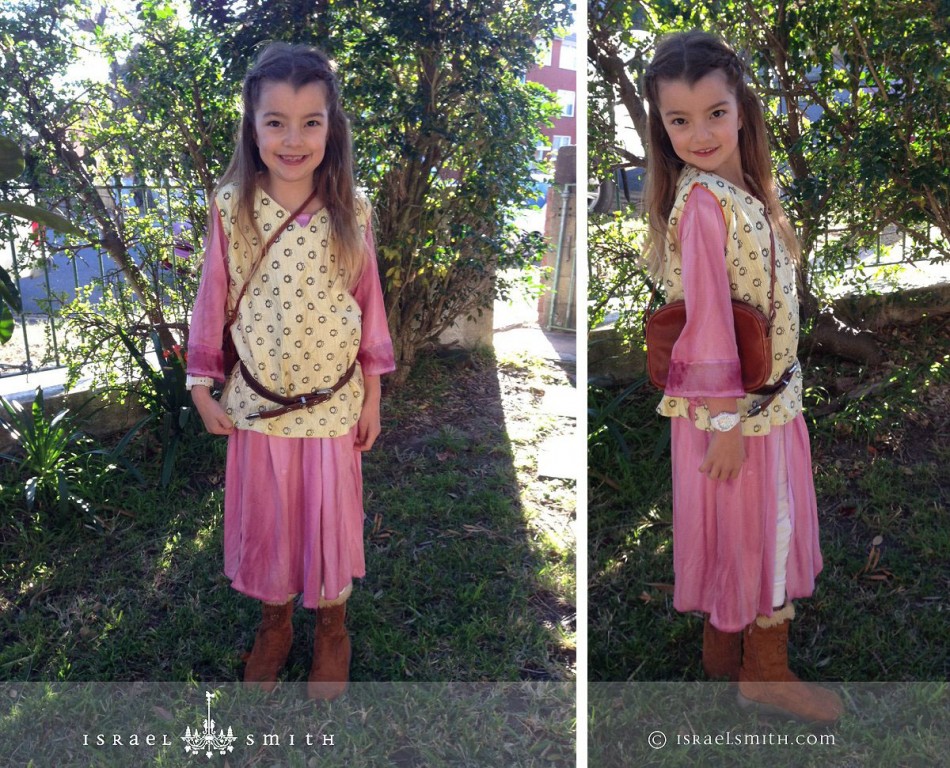 Indrani’s school (South Coogee Public School) had their Book Week Parade this morning. It was beautiful to observe the excitement as the children ran up to each other to ask who they were or tell them their outfit was awesome. The excited babble of 500 odd children in the quadrangle during the parade was almost deafening and I seriously did not hear one thing the librarian said over the loudspeaker throughout the entire parade.

With that aside, as a parent of a girl in infant school, I am somewhat afraid of what lies ahead for Book Week Parades. It seems with each year that passes, Indrani’s independence of choosing not just the character but how the character will dress is becoming, lets say, a little challenging. Or maybe we are just not accepting she is growing up. Let me explain.

In Kindy, she chose Hermoine. This was easy – plait her hair the night before so it was crimped in the morning, add a cape to her winter uniform & give her a wand and off she went.

In First Class, she chose Alice in Wonderland. Not as easy as Kindy but still not too bad. Pull out one of her dressy dresses, throw an apron over the top & put in a head band. Sounds simple but I did have to pull apart a white dress I no longer wore and make it into a white apron. Still no real drama. 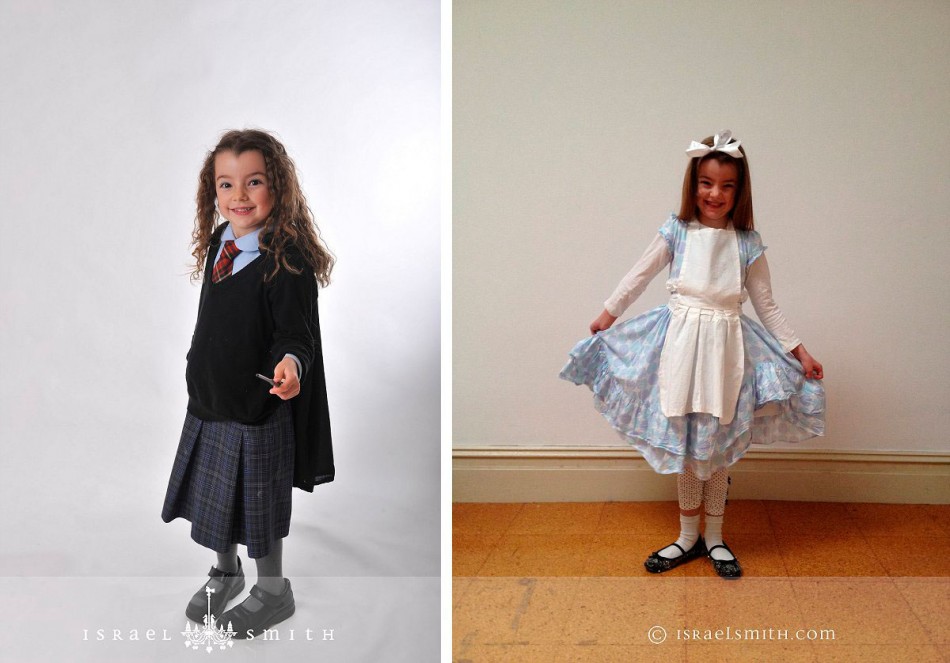 Then there was this year. Second class. To set the scene. Indrani is 7,  and in second class she is amongst 8 year olds and the occasional 9 year old. She’s also reading books suitable for 3rd class. This year she chose a character called Shelley from a Paul Jennings book. Shelley just happens to wear cut off frayed shorts and a blouse that ties at the bottom. Israel nearly had a heart attack when she started talking about this outfit. She had it all sorted. She was going to pull apart the hem on a pair of her shorts so they frayed and we could buy her a blouse to tie up. I won’t go into the details of the tantrums that followed when we told her that she would not be going to school dressed as Shelley. After a day or 2 of stomping around the house, Indrani started to think of other characters. On Sunday afternoon (just 2 days before the Book Week Parade), she with the help of Israel decided upon Lucy from Narnia. Then with a showing of the picture her and Israel found, I had to wave my wand to create the outfit. (For those crafty minded people, check out the magic I wove with my wand below).

So what has this got to do with Photography or Family Portraits?

Absolutely nothing except I am penning this as as gratitude piece to our photography business. It allowed me to down tools from work for a good few hours to deal with what’s truly important. We’ve chosen what’s truly important for right now is being there for our children when they are young. For yesterday and today, that meant having time to create a Book Week Parade outfit and attend the parade. And the look on our girls face this morning as she admired herself as Lucy was worth every minute. So that is why I am so grateful to our photography business. I think it’s worth sharing what ones grateful for because the act of gratitude is such a positive act, and we all need positivity in our life.

So you are a little crafty? Here’s how I repurposed an old Princess dress up.

As a general rule, we don’t buy new outfits or hire them for Book Week. Instead we repurpose something we have and have a $20 budget to complete the look.

Our starting point this year was a Princess Aurora dress up. We needed to change the colour so it was a bit more reddish brown. I love to make home made remedies for everything instead of introducing chemicals into the house, so I googled how to make homemade clothing dyes. I came across a You Tube clip called Talkin Trash which showed how to make dye from vegetables and things in your kitchen cupboard. I then found another post about how beetroot created a reddy brown colour.

Here in this picture I am boiling the Aurora dress in a fixative of 1/4 white vinegar & 3/4 water. In the other pot, I am boiling 4 peeled beetroots sliced thickly. Once boiling, both were reduced to simmer for 2 hours. Then I drained and squeezed water from the dress, strained the beetroot, then poured the coloured ‘dye’ into the pot with the dress. Once it was all covered, I pegged it out to dry.

Next with our $20 budget we went to a Vinnies type store & found the top in the picture below, a brown leather belt and handbag. I unpicked the orange colour & all the flourishes from the top then gave the Aurora dress a split up the middle. This morning I braided Indrani’s hair and she was transformed into Lucy. What do you think of the results? 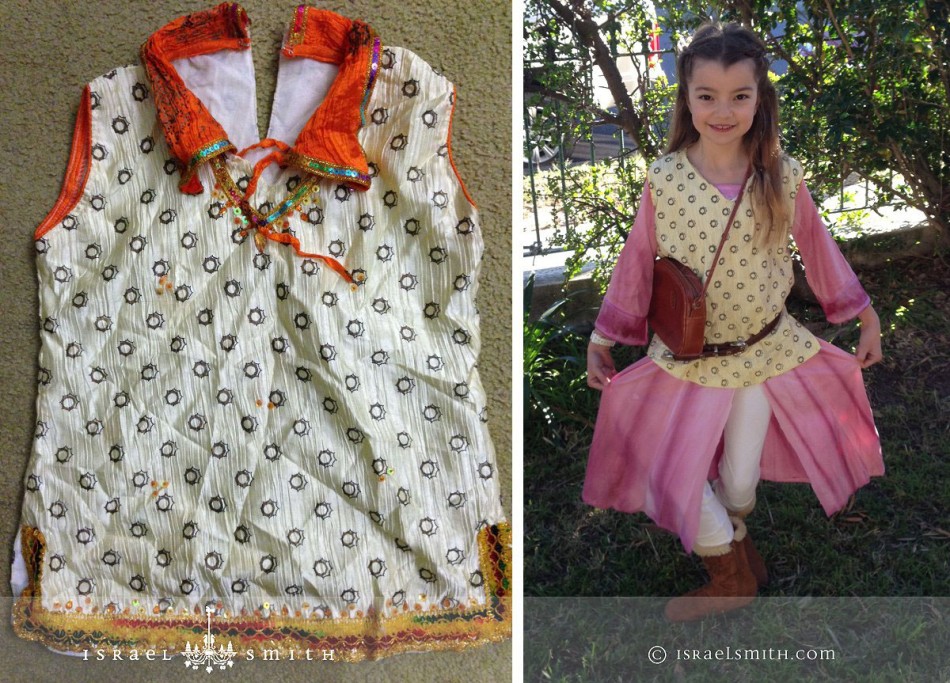