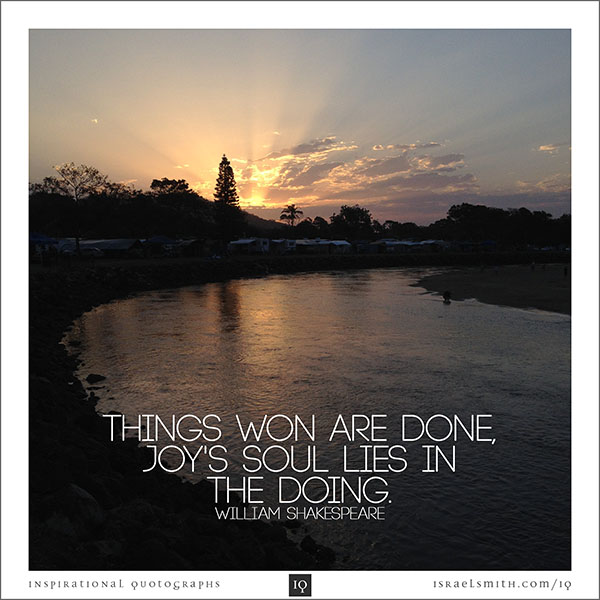 Today’s IQ is a dedication to doing: to getting things done, making sh!t happen, taking the first step, and following through to completion.

My yoga practice this morning was really shaky. But, having taken the first step in actually getting up at 5am to do it, I followed through and completed it. There were probably 4,528,103 times when I felt like quitting part way through, but I stuck it out. I feel better for completing it. And completion is a habit.

Random aside: I met a guy called Paul Jurak yesterday afternoon while shooting this image (he is the silhouette crouching at the edge of the water, middle-right of shot). He’s a lovely, friendly guy, and is a cancer survivor. We got talking about how amazing the light was, and he told me a bit about his story and his new-found love of photography.

Turns out he’s a bit of a famous figure in Canberra, having been published in the paper, interviewed on telly, and so on. Check out Kayak Cameraman for some examples of his images.

Interestingly, this is one of only a handful of shots I captured yesterday – I took too long to get to the “doing” part of my shoot yesterday, and missed all but the last minute of amazing light. Lesson learned.

Have an amazing day, get DOING and don’t procrastinate.