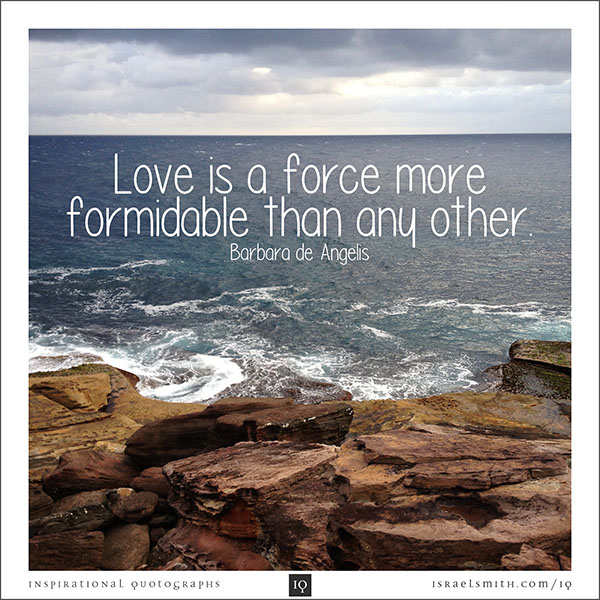 “Love is a force more formidable than any other. It is invisible – it cannot be seen or measured, yet it is powerful enough to transform you in a moment, and offer you more joy than any material possession could.” – Barbara de Angelis

I simply had to include the full quote above… the IQ wouldn’t work with that many words, but Barbara’s words are awesome, and each of you deserved to hear that.

Today’s quote is to honour the vow renewal ceremony I photographed a few weeks ago. In case I didn’t mention it, I shot what was effectively a second wedding ceremony for a husband and wife, in front of their three school-aged daughters, family, and close friends. The major difference was that the ceremony was held at a palliative care facility in Sydney’s North, and the wife was in the final stages of terminal cancer.

I edited those images today, and cried several times. I was humbled by the intensity of emotion shown by the wife / mother in the images. Her strength was failing, yet she was able to grab her husband and kiss him so passionately and with such force it made me slightly embarrassed. She held her daughters’ faces, and caressed and spoke to each of them so intently, it was like she was transferring her own life force into each of them to carry into their adult lives.

Which, I guess, is exactly what she was doing.

Which brings me to today’s quote.

Love is a force more formidable than any other.

Did you know that I’m a coach? If you’re tired of feeling overwhelmed, stressed or like you’re failing miserably at being the best version of yourself, I’m here to help. I use NLP techniques, belief-shifting conversations, and a whole bunch of lived experience to coach men (and a few women) to become their best, brightest self. Contact me now for a 1 hr Breakthrough Coaching Call, and I can get started supporting you right away.

I also publish a podcast, and I am building an email-only community called The Illuminators which  you’re invited to join.

I look forward to continuing to support you!