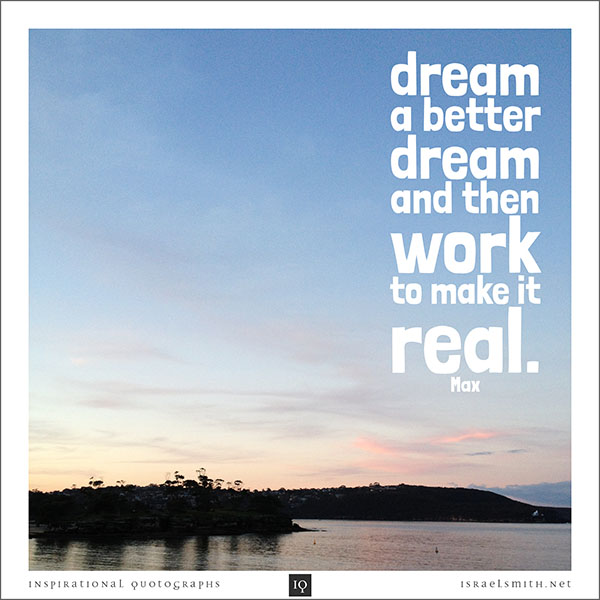 Today’s quote comes from a children’s movie called “The Adventures of Sharkboy and Lavagirl – 3D”. Max is the lead character. (He apparently is without a last name, which explains the monosyllabic attribution.)

I could SO easily spend 1000 words slagging off the quality of acting, writing, and directing that made this movie what it is.

But life is too short to be negative.

So, instead, I’ll say that I really enjoyed sitting with my kids and watching the tail-end of this movie. I’ll even admit that I kinda liked it. I found the corny drama endearing and hilarious.

“Dream a better dream, and then work to make it real.” – Max.

There are a few key take-away lessons here:

ONE
Gems and life lessons can be found in the most unusual of places – namely, a bizarre and fairly cheesy kids movie from 2005.

TWO
The quote itself is effectively a mission statement for anyone who wants to live a radical life.

It acknowledges the fact that dreaming is the start of the process, but then you’ve also gotta DO THE WORK.

You’ve already got the dream. Actually, if you’re anything like me, you’ve probably already got dozens of them.

Have you done the work yet?

If not, why not? What’s stopping you?

If you have, how is your life now?

Either way, drop me a line and let me know.