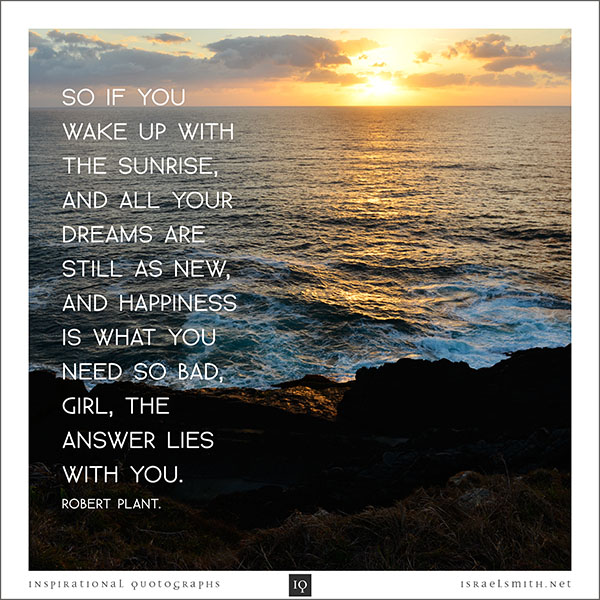 Two guesses as to who I just saw in concert. Led Zeppelin? Nope. Robert Plant, the lead-singer and co-songwriter of aforementioned Led Zeppelin? Yep. Got it in two.

Amazing, inspiring, touching, emotionally charged and very moving. I cried during “Going To California” – one of my all-time favourites, and I nearly cried again during “What Is And What Should Never Be” – the song from which I drew the quote of today’s Quotograph.

(The image of this Quotograph, as with all the rest of the IQ’s, was taken by me. I shoot all of these images myself, and most of them come from my iPhone. The rest come from a DSLR of some description. It just goes to show that you don’t need a rockin camera to take stunning images – just a clear vision and the skills to use the tool in your hand to express that vision.)

The most amazing part of the entire Robert Plant show tonight was how much he still clearly loves what he does and feels it right through his bones. This was not a “greatest hits” show, it was a fresh performance of a singer with his new band. He not only sang some of his oldest and most well-known songs, but he re-interpreted them with the new musicians, a new creative and artistic aesthetic, and a fresh perspective on life stemming from being in his mid-sixties as opposed to his mid-twenties when he wrote the songs.

There’s something in that, right there.

Are your dreams intact? Is the sun shining? Do you yet still seek happiness? The answer lies with you.

All my very best to you, as always, and with love,
Israel. xo

Did you know that I’m a coach? If you’re tired of feeling overwhelmed, stressed or like you’re failing miserably at being the best version of yourself, I’m here to help. I use NLP techniques, belief-shifting conversations, and a whole bunch of lived experience to coach men (and a few women) to become their best, brightest self. Contact me now for a 1 hr Breakthrough Coaching Call, and I can get started supporting you right away.

I also publish a podcast, and I am building an email-only community called The Illuminators which  you’re invited to join.

I look forward to continuing to support you!