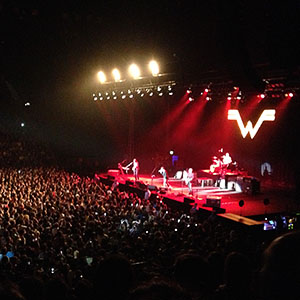 Tonight, I’ve been reminded of someone used to know; someone I miss.

About 13 years ago I knew a guy who was fearless. Someone who took risks because he could. Someone who was limited only by the crazy dreams that came into his head. Someone for whom the world was an enormous piece of blank paper, waiting for him to make his mark.

As I write this, it’s 12:28am, and I’ve just returned home from a Weezer concert at the Sydney Entertainment Centre. I am compelled to write because the show was simply amazing, and because I was utterly inspired. I must also apologise if this post is slightly fragmented – it’s late, and I’m a little fragmented myself right now.

In 1992, a man called Rivers Cuomo took a risk and formed a band. He had an interesting, unique view on the world, and had something to say about it through his music and lyrics. The band released their first album, and found massive mainstream success internationally.

Tonight, the band played their debut record from start to finish. The album closes with a song called “Only In Dreams”, which has the following lyric:

You walk up to her.
Ask her to dance.
She says, “Hey, baby, I just might take the chance.”

As I jumped and hooted through their set, it was this very line from that last song that stuck with me, and left me dizzy with inspiration.

Weezer have sold over 3 million copies of their debut album, and have been playing these songs for almost 20 years, to hundreds of thousands of people around the world. Not a bad effort, by anyone’s standards.

If they didn’t have this dream in the first place, and if Rivers Cuomo hadn’t taken that initial risk to form the band and write some songs, none of this would have happened.

In my early 20’s, I was that fearless guy. I played in a band of my own, I dreamed big dreams, and I had such belief! My band was the best band in Sydney, and I believed it wholeheartedly. Self doubt? Pah. Self confidence was the trip I was on.

I had no qualms about asking the drummer from my favourite band (You Am I) to DJ in between sets at my band’s EP launch. And he said yes. I had no problems sending our music to Triple J and asking them to play it. And they did. I asked for big editorial write-ups in the street press along with my meagre adverts. And they agreed. I even boldly asked my boss to give me 6 weeks of annual leave over summer one year, because I wanted to go on a surfing trip up the coast. And he did.

I believed I could do anything – and the universe agreed with me, and let me do it.

There’s a subtle undertone in that quote I mentioned above: be courageous.

If you’ve ever been to a school disco, and wanted to ask someone to dance, you’ll know what I mean. Taking that first step to go talk to them feels like you’re about to put on a suit of armour and go out to slay a dragon.

Thinking back to who I was back then, I realised that I used to have way more courage. I took more risks, tried more new things, and had unstoppable self belief.

If there’s something I have taken away from tonight’s performance, it’s that without self belief, we’re all simply empty husks, just going through the motions.

My vow to you is to be filled with self belief, in the same way I was when I was 20 years old.

What do YOU believe?

I believe we all have the power to make our life utterly amazing. To dream, to see new opportunities, and to take action. To savour all the good stuff life has to offer, and to be that courageous guy asking that girl to dance for the first time. (Or vice-versa, or same-same. It’s all courage; it’s all love.)

I promise you – if you believe you can do anything and be anything, the universe will start to believe you too.

In that song, I kinda think ‘she’ is the universe. We each need to walk up to her, and ask her to dance. You never know – she might answer: “Hey, baby, I just might take the chance.”

Believe in yourself. Be courageous. Take a risk.

Here’s a chance to practice: Be courageous and tell me about your dreams in the comments below. I’d love to hear from you!

Until next time, my friends.

P.S. If you’ve not yet subscribed, take a look at this Inspirational Quotograph I created earlier this evening. As you do, think about the moment Rivers Cuomo took that risk and formed Weezer. Think about that moment next time you see a new opportunity in your own life, and be courageous.  (And if you like the Inspirational Quotograph, you can subscribe for free here.)