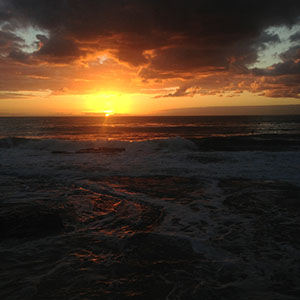 My past few weeks have been long, busy, fast-paced and fairly stressful. I generally keep things pretty balanced and together, but lately the home and work situations have been disrupted and out of balance.

My beautiful daughter has been getting bullied at school, and as a result, her behaviour has been really hard to manage. Fortunately the bullying has been dealt with, but it took us almost two weeks to find the source of her unease, and that was a fortnight from hell as far as she was concerned.

My delightful son is normally an amazing bundle of happy energy, but he’s been a bit whingey for the past few weeks, too. Oh, and he started biting kids at day care. We haven’t found the root cause of that yet, but it seems to be linked partly to the “terrible twos” thing, and partly to him not being able to articulate his frustration when things aren’t going his way.

Lastly, my wife & I have had some SPECTACULAR robust discussions lately. I have to say, when we get each other wound up, we have the “button-pushing antagonism” thing down to a fine art. (Some of the doors still don’t quite close properly… ! Hah, just kidding.)

So. As I sit here, reflecting on my past few weeks since I wrote something to you all, I can draw a simple conclusion.

Don’t worry, I wasn’t going to let you wallow in the murk for too long. There’s always a lesson.

Today’s lesson is: keep going. When everything is crap, stay as strong as you can, and keep moving forward. You may not realise it, you may not even believe it, but the beautiful stuff you’re looking for is just over the next bump/hill/mountain you’re currently struggling to climb.

I created an Inspirational Quotograph today which sums this up perfectly. Click here to view it.

You know, sometimes it’s easy to simply get stuff done in life. And sometimes, it’s a grind. When it’s a grind, remember that it is always darkest just before the day dawneth.

What does that mean? It means that the uplifting, glorious, colourful, beautiful sunrise is just about to happen. It means that when it’s hardest, darkest, and most challenging in your life, that is the time to simply keep going. Because before you know it, you’ll be doing cartwheels in the sunshine.

My wife and I have recently been grappling with how to tie three seemingly-unrelated business ideas into a cohesive whole. It’s a bit fluffy still, and I can’t tell you all of the beautiful juicy details yet because, well, there aren’t many. Yet.

However, we did finally come up with the most amazing way of interleaving all three businesses, so not only are they linked, but they support and re-inforce each other. It’s SOOO amazing, that I can’t wait to share it with you all. And it is SOOO the perfect case study of the “it is always darkest just before the day dawneth” thing.

We kept working at it, pushing forward despite getting roadblocked and baffled at every turn. It’s kind of a big deal, since the whole idea is that these businesses take us on our 12-18 month journey around Australia in 2016.

But finally, the solution dawned on us. (Hah. Yes, pun INTENDED.) And now, we’re doing cartwheels in our own sunshine.

It’s All Been Said Before. / You Are Perfectly Normal.

There’s a reason I chose that Olde English phrasing of this particular quote. (The quote is more commonly written/found with a more modern wording “It is always darkest before the dawn.”)

It was originally written back in 1650 by an English fellow called Thomas Fuller – a clergyman, writer and historian in his day.

Apparently, back in 17th Century England, life held a few challenges. Apparently, people haven’t changed that much, and are occasionally confronted by darkness. Apparently, we all need a little hope from time to time.

There’s two take-aways here: firstly, everything you’re dealing with has been dealt with and/or overcome in some shape or form before. People just like you have lived to tell the tale.

Secondly, and this is the important one: YOU ARE PERFECTLY NORMAL.

It is always darkest just before the day dawneth. So keep moving towards that dawn. You’ll be there before you know it.

As always, with love,
Israel. xo

PS Feeling better? I hope so. Why not tell me about it in the comments below. I’d love to hear from you!

PPS Extra credit to anyone who followed ALL those YouTube/Wikipedia links. It’s stupid-o-clock as I write this, so I was VERY distracted. And anyway, those lines are some of my favourite film moments. Why not share the love in an Intergoogles, Networky-webs, kinda way?