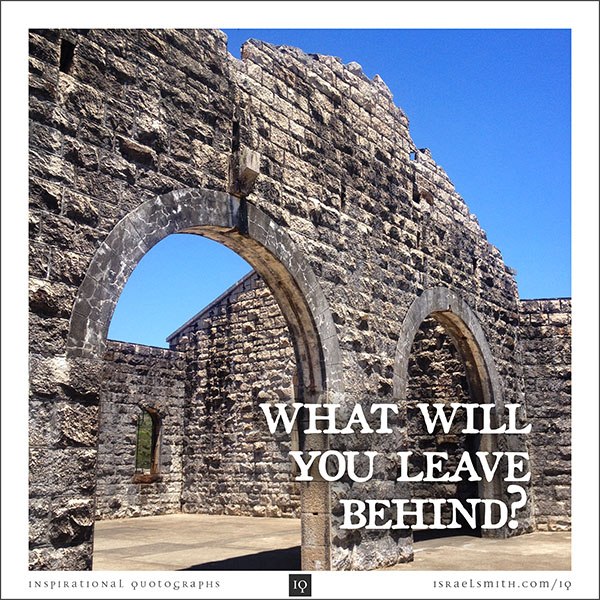 “What will you leave behind?”

This is a question of LEGACY. What will you be remembered for? What will be the sum of your life contributions after you die?

Today we visited the Trial Bay Gaol at South West Rocks. Here’s an abridged history lesson, because it is informative and educational:

Trial Bay is about half way along a popular mid/late 1800’s shipping route, before highways and freight trucks were around. It was a perfect spot to take a break, as well as a great bay to shelter ships during bad seas. A plan was formulated to build a breakwater with convict labour, so the gaol was built to house inmates while they constructed the breakwater and thus create a Harbour of Safe Refuge – i.e. provide more shelter to endangered ships.

The gaol construction began in 1876, and took 13 years to build. Inmates began construction on the breakwater from around 1886 on and off until around 1903. Despite more than 10 years of construction, the breakwater had reached only 300m of the planned 1500m length, and had caused the formerly deep Trial Bay to fill considerably with sand. The breakwater was abandoned, as was the gaol and the project, because of the poor progress, and because ship construction had advanced to no longer need the harbour. The gaol was used again during WW1 to house “enemy aliens” from Germany, and was finally abandoned for good in 1922.

Three important points to be gleaned from this:

Things that last, take time to build. The timber roofs and beams were burned in a final, sanctioned torching of the gaol in 1922 and are obviously absent, but the granite structure of the buildings is still intact and sound (pictured), even after almost 140 years. “They don’t build ’em like they used to” is not just a cliché in this context; it is an absolute statement of fact.

Don’t mess with the Mother Nature. Man’s ingenuity of building a breakwater ended up disrupting the flow of sand out of Trial Bay, and completely changed the dynamic of the bay. Also, Mother Nature disrupted the construction by sending massive gales and stormy seas. Don’t mess with her. Seriously.

Dare to have a big vision. The man responsible for the vision of this prison and breakwater was Harold Maclean. He had a vision for this work, and despite dying only a few years after the prison was completed, his work continued and I wandered around in part of his built legacy today.

What will you leave behind?