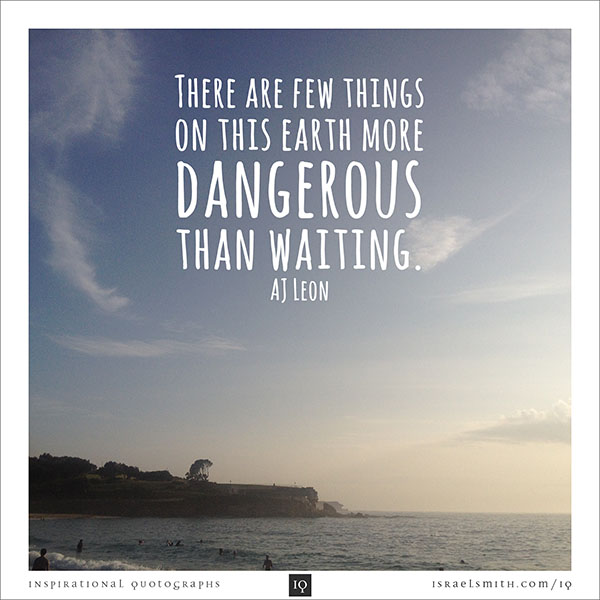 “There are few things on this Earth more dangerous than waiting.” – AJ Leon

Sometimes I have these things I call BFO’s… Blinding Flashes of the Obvious.

Today’s was about waiting. I’ve been accepted for a first interview as a research subject for a study about the effects of daily yoga on depression symptoms. The interview is later this week. I realised that I’ve been waiting until that interview to actually do yoga, despite needing it, despite my body waking up stiff and tight, and despite the fact that I’ve been doing yoga with great benefits for years. (On and off.)

Actually, even worse, I was waiting for permission. Like I had to make sure I was allowed to start, as opposed to simply choosing to do something good for me. #facepalm

When I realised this – with my beautiful wife’s help – I immediately thought of a passage from my dear friend AJ Leon’s book – The Life and Times of a Remarkable Misfit.

The piece is my favourite in the book. It is actually a passage that AJ used to close his presentation at MisfitConf  in Fargo. It brought me to tears.

Seriously, after his presentation, I was standing in the corner, surrounded by loving friends, sobbing big, sniffly man-tears about how much it meant to me, how it made me feel powerful and fragile at the same time, and how much I f*cking loved everyone.

So. Here’s the passage:

There are few things on this earth more dangerous
than waiting.

The obvious problem with waiting. Paralysis. The
nothingness that comes with not trying.

The not-so-obvious problem with waiting. The more
you do it, the better you get at it.

You want to know the truth? I’d rather slip backwards
than stay put. Because at the very least I’m
learning something for my next step up. And that
something is usually more valuable than what I
would have learned by doing nothing at all.

Are you waiting? Really? STILL?

If you aren’t massively inspired to Get Moving after reading that, I’ll eat my hat.