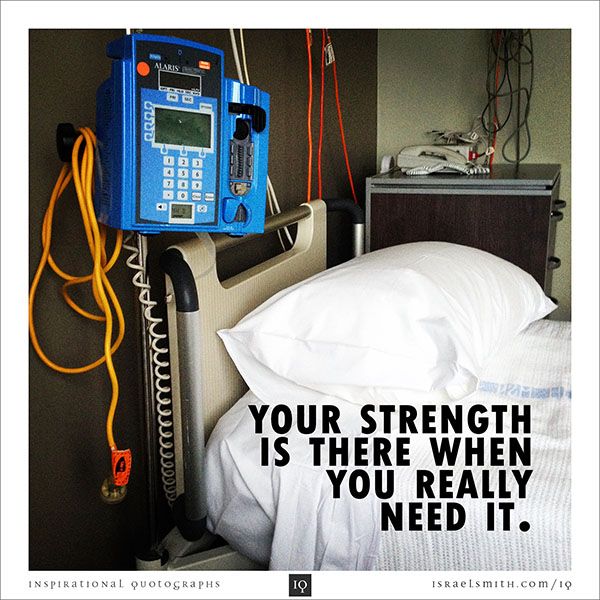 Your strength is there

“Your strength is there when you really need it.”

My son is currently in hospital – which is my reason for the delayed IQ today. He’s always had “funky” big toes – they were deformed when he was first born, and after some surgery at 10 months old, he is currently now recovering from his second (and hopefully last) surgery on his big toes to get them closer to regular shaped, regular sized, regular functioning big toes, just like everyone else.

Here’s the thing. Prior to surgery, he had no problems running, playing, jumping, or anything. Functionally, he was absolutely fine. The challenge is that, as he grows, the misshapen toes would possibly callous and become painful or arthritic. The other challenge is that he would eventually reach a point where shoes weren’t an option. The big toes skewed out at around 45 degrees from his foot, making the front of his foot much wider than even the widest shoe fitting. We are already putting him in shoes a few sizes too big, to allow for his big toes.

The challenge Bel and I faced when considering whether or not to arrange the surgery was not insignificant. We knew we would be electively putting him through a general anaesthetic procedure, with at least 4 weeks’ recovery time, and causing him a great deal of pain along the way. To see a child in pain at all is bad. When it’s your own child, and you carry the knowledge that you put them there is really tough.

Yesterday afternoon around 3pm we checked in to the hospital. Those of you that follow my Instagram account would have seen this image already, and a few extras besides. After an hour or two of surgery, we were invited down to the recovery ward. (Oddly enough, using one of those beepers I normally associate with “your food is ready” at a pub bistro…)

He was super-groggy, dosed up to the eyeballs on morphine, and really upset. I managed to calm him down a little by holding him close and singing him his bedtime song. Bel was an emotional wreck, as you can imagine. We took him back to his ward, and tried to settle him into some sleep with mixed success.

Eventually I went home, brought Indrani back for a visit, along with Ril’s grandparents, and then we retired for the night. Bel stayed overnight, and in the morning I awoke to a lengthy text message explaining the fitful, nightmare-riddled sleep our boy endured.

I had to get up at sparrows to get Indrani’s lunch ready, drop the grandparents at the train station, visit the hospital, and get the girl to school. Interestingly, I found it to be one of the easiest mornings I’ve had in recent weeks in terms of simply getting out of bed feeling refreshed and ready for the day.

(In other words, lately I’ve been struggling big-time with the simple act of getting out of bed. Except today.)

I think the difference is in what I wrote for today’s IQ. When you really need your strength, it’s there, ready and waiting. I still feel great despite the lack of sleep, the stress, and the emotional hangover of the past 24 hours.

Let this be some kind of reassurance: when you really need YOUR strength, it’ll be there.