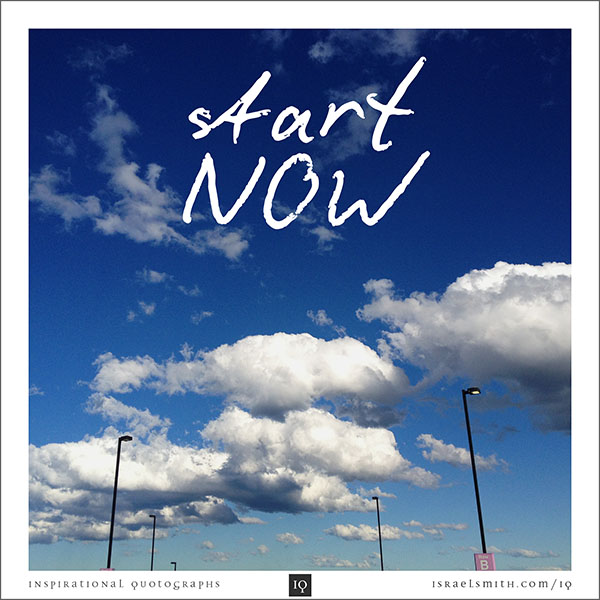 It’s funny how my mood ebbs and flows – from “Drive” and the perils of being very driven, to “Start NOW”… all in the space of 24 hours.

Today, I had a spectacular day, which I largely attribute to the 7.5 hours of sleep I had last night.

(If you EVER doubt the value of sleep, go to bed at 9:30pm, and sleep until your body wakes you up. Then write down how you feel for the whole day afterwards.)

It started poorly. We were robbed. Defrauded, actually. $2400 skimmed from our account. Gone. In cash, too, making it even harder to a) trace, and b) get back quickly. No idea who, how, etc, but we went to the bank, forms have been filled in, and procedures have been commenced. We are hopeful. But it wasn’t how I planned my day to begin.

The icing on this cake of awesomeness is this: For the first time in the history of my photography business, I am SO heavily booked for the next four weeks that I have actually stopped accepting any more bookings before Xmas. I have literally closed this year’s bookings, and my team are only accepting family portrait commissions from January 2014. Which, incidentally, is already booking out.

Reflecting on this after I completed my portrait shoot this afternoon, and chatting about it with my wife, made me feel brilliant.

The reason we’re so heavily booked? About six months ago, I started working REALLY HARD on marketing. Getting our name out into the world again*. Promoting my skills and work, if not fearlessly, at least courageously. Giving and giving and giving and giving until it hurt, and then giving some more. And let me tell you, there were plenty of moments during the past six months where I felt doubt, fear, and uncertainty.

*I say “again”, because we have already done this once or twice in the life of this business, but since I got diagnosed with depression in March 2011, I have been terrified of pushing the envelope, and have sat on my hands in fear far more often than actually doing the work on marketing.

That changed after I returned from Fargo.

I started working hard on marketing, and I made it a regular part of my week. I put feelers and opportunities into the world, and said “Yes” a lot.

And here we are, six months later. The payoff is starting to arrive. Our schedule is the fullest it has been in close to two years. And we’ve got more marketing in the pipeline for later this year and early next year.

Whatever you’re planning, it’ll take three to six months to come to fruition. (Unless you’re planting forests, in which case it might take slightly longer than that.)

Just start. Start today. Right now. And see where you end up.