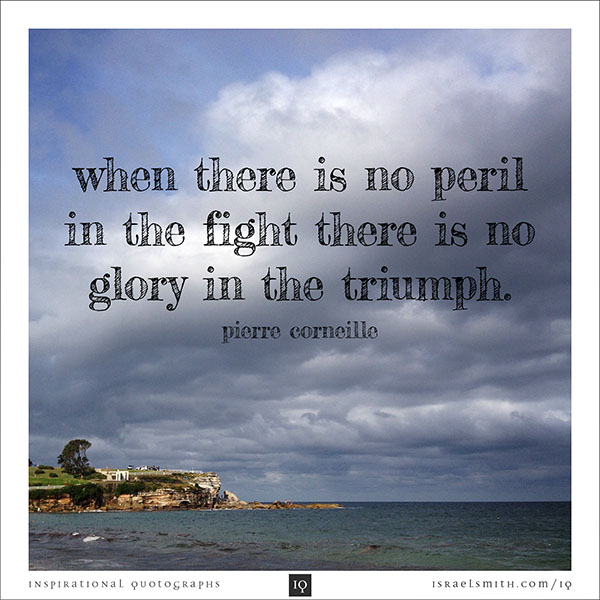 When there is no peril

“When there is no peril in the fight there is no glory in the triumph.” – Pierre Corneille

I watched The Truman Show again last night, after a gap of YEARS. (Sadly I had to sit through a LOT of horrible advertising to do so, but that’s another story.)

The film is ultimately a story of triumph over adversity, of conquering fears, and of fighting for what we believe in. I say “we”, because I think the story is relevant to each of us, as much as to the lead character, Truman himself.

At several points during the film, I related so deeply to the emotions and feelings portrayed by Jim Carrey – the feeling of being trapped, the feeling of not being in control of my own life, the feeling of everything being a little too hard, and just out of reach.

The aspirational climax of the film features a violent storm, where Truman fights for his desire to escape the constructed-reality of Seahaven by sailing against gale-force winds and enormous waves, to reach the world beyond.

I’ve written about this scene briefly before, but every time I think of it, or see it, I am struck with awe and simultaneously inspired by the defiance, the sheer strength of will and determination when Truman screams at the creator: “Is that the best you can do?! You’re gonna have to kill me!”

I’m sure we all find ourselves in positions like that from time to time. The further we stretch our comfort zone, the more frequently we find ourselves lashed to the rigging, fighting the proverbial storms of our lives.

Here’s the thing. Winning easily brings with it no satisfaction. We always gravitate to watch (and sometimes participate in) the hardest struggles, where the protagonists have to work hard to win their battles.

Why? Let me use the words of dear friend AJ Leon to help explain this:

Remember, Odysseus doesn’t breeze by the Sirens on a Carnival Cruise ship. Frodo doesn’t prance into Mordor with butterflies whisping around and gently toss the ring into Mount Doom. Luke doesn’t blow up the f*cking Death Star in the first 5 minutes of the film. And if they did, no one would give a shit.

It is the uncertainty of trial, the times they almost got it wrong, and their willingness to move on that gives the protagonists context, and give us a reason to pay attention. Whatever happened yesterday, last week, last year … that was all your world class MBA for right now. Because in the end, they that make no mistakes, make nothing at all.

AJ Leon – The Pursuit of Everything

And so I return to Pierre Corneille’s beautiful quote: When there is no peril in the fight there is no glory in the triumph.

So fight hard, fight valiantly, and fight the right fight, risking everything, so that the glory of your triumph is sweet, long, and well-earned.