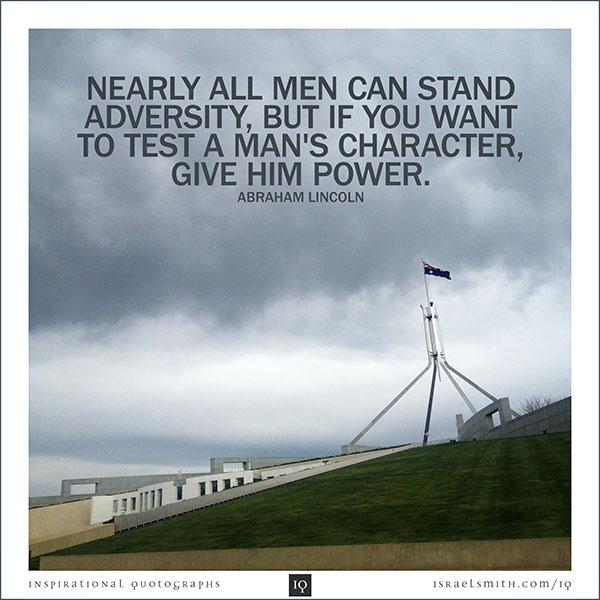 Nearly all men can stand adversity

“Nearly all men can stand adversity, but if you want to test a man’s character, give him power.” – Abraham Lincoln

Five hours’ sleep. Up at 6:15am. Madly get final client jobs finished. Spend several (fruitless) hours trying to fix yet another computer that has crashed – this time at our remote office, and via remote control. Fail. Try again. Fail again. Keep trying. Stop for a green juice around 7:30am. Pack clothes, cameras, laptop. Laugh at typically-ambitious planned departure time of 9am, as it sails past. When prompted by amazing wife, remember to have breakfast around 10:30am. Stop for about 8 nanoseconds, inhale expertly cooked bacon and eggs, tomato, baby spinach, paleo (nut) bread, decaf coffee. Continue mad scramble of packing, tying up loose ends, last-minute-isms. Argue with children around 11:30am, who are (understandably) going stir crazy. Amazingly avoid arguing with wife in same high-stress situation. Pack car. Strap children into car (less trouble that way) and accidentally let cat out while grabbing final bags. Cat bolts over fence, under house next door. Your correspondent curses furiously, threatening several devious tortures of a feline nature. Wife despairs. Drive off, run last-minute errands, deliver prints to framer. Drive to cat-sitter’s house to deliver house keys. Forget cat-sitter’s address. Make urgent, slightly ridiculous phone call to cat-sitter. Drive home, find errant cat on back porch asleep in the sun. Resist urge to go for choke-hold, instead place cat gently back inside locked house, with ample food and water. Drive off, then discover car needs fuel. Refuel. Resist urge for large quantities of sugary treats. Get on road. Hit peak-hour-esque traffic at 1pm. Meander along for approx 20mins before first “Are we there yet?” question. Try not to be too snappy. Try to explain relative times and distances to 7yo and 3yo children. Finally achieve forward motion. Gradually lose son to much-needed sleep. Listen to soothing music. Explain to daughter that headaches are quite often the result of head-down book-reading in a moving car. Eventually also lose wife to much-needed sleep. Smile deeply, enjoy the peace of the open road, and my loves sleeping and reading quietly.

Enjoy changing scenery. Notice far higher numbers of wind turbines dotting landscape, smile at renewable energy generation in action. Stop briefly and swap drivers at around 2-hour mark. Attempt to nap. Get continuously woken by son’s insistent conversation, and try to be grateful. Randomly notice odd things: concrete block in the middle of a paddock, with a circle-shaped hole (is it a dog-kennel for dingos?); more rocks and less grass. Arrive in Canberra four hours later than planned. Skip theme-park visit. Do a DBW (drive by and wave) visit of Parliament House, Old Parliament House, War Memorial, Portrait and Art Galleries, Lake Burley Griffin. Marvel at quality of extraordinary art and architecture in such a small city. Stop briefly outside Old Parliament House, next to Aboriginal Tent Embassy. Feel embarrassed at 3yo son needing to pee on the nearest tree (next to said Tent Embassy). Get mild hypothermia resulting from unexpectedly-dramatic temperature change from Sydney to Canberra. Finally check in to cabin. Eat dinner. Explain to children how top bunks aren’t safe for 3yo son, shake head as both children erupt into tears and tantrums. Catch an accidental head-butt to cheekbone while trying to cuddle son goodnight. Continue shaking head while children – now radically overtired – start alternately laughing and arguing, in the dark, well after bedtime. Watch helplessly as wife struggles with son and daughter for a further hour. Write an IQ with bleary eyes and waning concentration. Feel grateful I’m on holidays.

Today’s photo is of Australia’s Parliament House on Capitol Hill in Canberra, during aforementioned DBW. The overall selection of quote and image is in many ways, a reaction to the current political climate of Australia. A right-wing conservative leader has just been elected Prime Minister, and it is my fear that he may well prove to be Australia’s answer to George W.

In the meantime, I’m going to bed early, to maintain the strength of my own character.