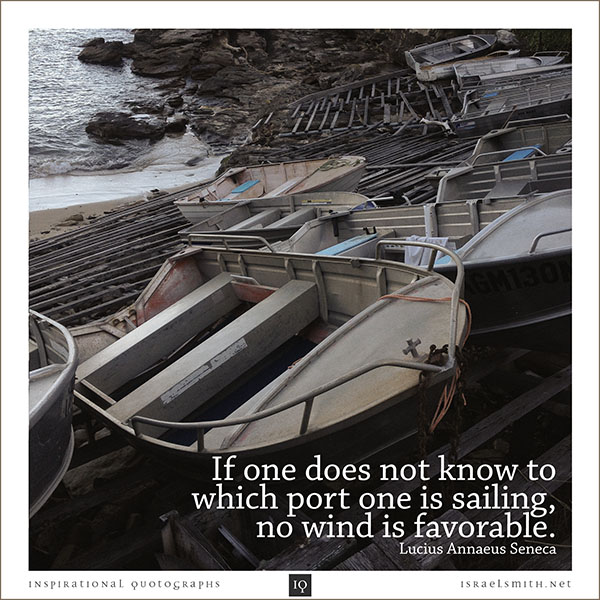 “If one does not know to which port one is sailing, no wind is favorable.” – Lucius Annaeus Seneca

I used to run and walk past these boats an awful lot when I was marathon training. It’s part of a 15km loop I used to do from my house to North Bondi and back, along the coastline.

This is a place called Gordon’s Bay – or Thompson’s, depending on how long you’ve lived here. These boats all belong to local fishermen, who allegedly use them to go fishing. There is a similar collection of “fishing boats” held at the North end of Coogee Beach, also belonging to local anglers.

I can count on one hand the number of times I’ve seen any of these boats being used, in over seven years of living in this area.

I digress. It doesn’t matter whether the boats get used or not. They exist, are owned, (mostly) loved, and are waiting, ready to do their job. It’s a pretty simple gig really: float, be steerable, be movable.

Humans have a waaaaay more complex gig. I’m not going to enumerate our multitudinous responsibilities, but I believe at the heart of anything meaningful in our lives is a knowledge of our own destination, or at least the next step along. (We all share a final destination, but I’m thinking less morbidly right now…)

We need to know our next port, otherwise no amount of action (wind in our sails) makes any difference. Climb all you like, but unless your ladder is propped against the correct wall, it’ll be pointless.

Do you know where you’re going?

With LOTS of love,
Israel. xo

Previous Post: « I am only one.
Next Post: A deeper look at the value of family portraits »