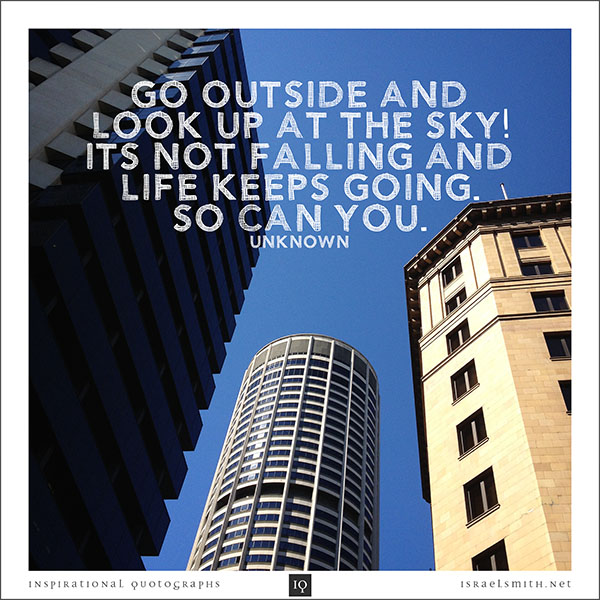 “Go outside and look up at the sky! It’s not falling and life keeps going. So can you.” – Unknown

Today I’m delivering a webinar about “How to stay positive when you’re doing it tough in business”. The webinar will be hosted by the Australian Institute of Professional Photography, but since it’s going to be delivered live via a Google + Hangout / YouTube thing, you’ll be able to tag along and view it if you’re interested.

It’s on at 12:30pm Sydney time on Friday 6 September 2013. Since this email is typically sent around 7am Sydney time, if you’re rocking the IQ’s from International locations, simply add 5 1/2 hours to the time this email arrives, and you’ll have the time-zone shuffle all sorted.

If you’re interested in listening/watching online, hit me up on Facebook and add me as a friend – I’ll be announcing it as a status update when it’s about 10 mins before start.

Today’s IQ is appropriately themed for the content I’ll be delivering online, but oddly enough, it is also perfectly themed for those among my compatriots who are getting unduly worked up by the upcoming election and likely change of government. To draw a parallel, the party who look likely to win this Saturday’s election have a leader who may well go down in history as Australia’s equivalent of George W Bush. Not because he’s a war monger, but because he’s an imbecile.

But, the sky isn’t falling, and life keeps going. So can YOU.

I love that you’re here, and I LOVE being able to publish these IQ’s for you again.