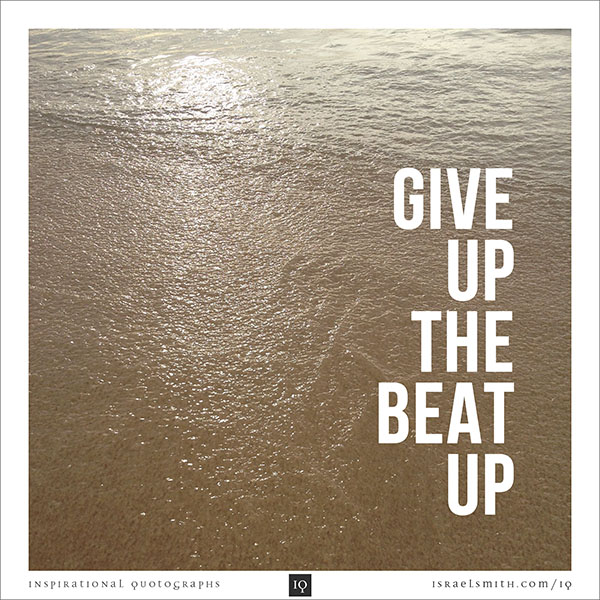 Give Up the Beat Up

I had a dream last night that inspired today’s quote.

I was travelling through Amsterdam with my wife, my daughter, and (I think) my sister-in-law,  but for some random reason, NOT my son. At one point, I had to leave the group – or the group had to leave me – and while I was on my own, I kept getting harassed by locals. I was wearing my Nikon shoulder satchel, which had a camera and all our phones and passports in it, and this kept getting pulled-at, and interfered with, by a seemingly endless supply of undesirable folk.

Just before we parted ways, we had bought about six or seven big bags of groceries and travel supplies, which again, had to stay with me. I was trying to guard these while fending off attacks on my shoulder satchel, but eventually all of our groceries and supplies got stolen. In my dream, Amsterdam was so hideously expensive that in the process of buying and losing so many supplies, we had essentially lost thousands of dollars – and I remember this being pretty much all our money.

To top this all off, my wife had left her phone with me, so I couldn’t phone her to get them all to come back. Somehow, I lost them, too.

I was devastated. In my dream, I was trying to figure out how I was going to pay for more food and hotel rooms, after losing almost all of our money, and at the same time trying to fend off pick-pockets and bag snatchers while searching for my wife and daughter and sister-in-law.

At one point, I remember thinking that I wouldn’t ever see them again, and eventually I started to blame myself and beat myself up (mentally and emotionally) for all the bad things that had happened.

If only I’d not brought my Nikon bag, maybe I wouldn’t stand out so much. If only I’d remembered to get Bel to take her phone with her, maybe I’d be able to reach her. If only I’d fought harder for the grocery bags, they wouldn’t have been stolen. And so on. You can imagine how I was feeling, in my dream, by this point.

It was a pity party, and I was the guest of honour.

At the end of this dream, I felt horrible. I woke up with a pit in my stomach that I’d done everything wrong, and I was to blame. Then I realised that it was only a dream, and told myself to snap out of it!

What stuck with me, however, was the memory of the big personal beat-up journey I’d taken myself on, both during and after the dream. It was like all my inner-critic voices had banded together and formed a choir, singing the score to a lifetime of mistakes and failures.

I realised that the big beat-up was utterly pointless, because everything bad that had just happened, was happening in a dream!

As I reflected further on this, I realised there’s really no point to beating myself up for stuff that happens in real life either, because it simply drains my energy and sends me backwards instead of moving forwards. It’d be far more productive to stay positive and look towards the next challenge or accomplishment, instead of wallowing in a big pool of self pity and reproachment.

And that’s how I came to today’s quote.

Give Up the Beat Up.

It doesn’t serve you, me, or anyone else, when we beat up on ourselves and stay small. It DOES serve ourselves and others, when we do work that matters, and make a contribution to the world.

So focus on that, instead.