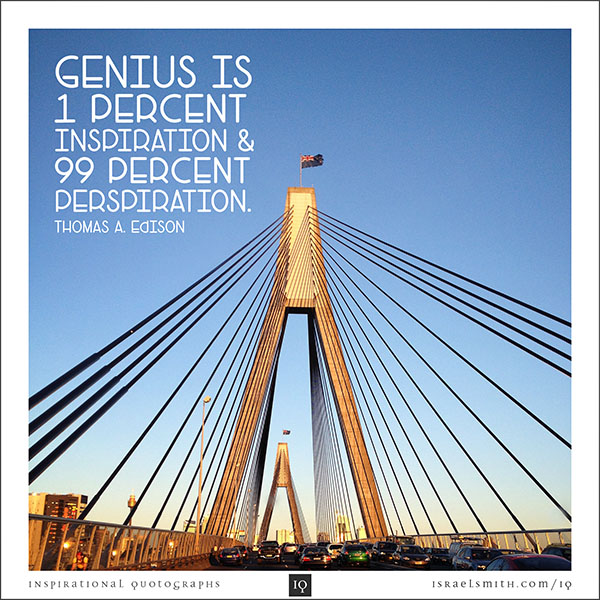 “Genius is one percent inspiration and ninety-nine percent perspiration.” – Thomas A. Edison

It’s true. Sometimes we all have a tiny spark of inspiration – an idea, a brainwave, a random thought – that is utterly groundbreaking and truly spectacular.

Hmmm. We have to take action. We’ve gotta make it happen. Geez. Tough gig, but someone’s gotta do it. Might as well be you.

I’ve been working on a new website design, on and off, for the better part of six months. Trying different ideas, failing. Trying new ideas, liking them for a day or two, then shelving them. Trying some more stuff, throwing a whole bunch of disparate concepts at the wall, and seeing what sticks.

I think I’ve finally found it, but it’ll take a week or fifteen before it’s ready to launch.

Either way, I’m excited, because the tiny spark of inspiration about six months ago has been followed by six months of banging my head against this concept. And it’s finally starting to work.

To paraphrase my buddy Thomas A. Edison, when speaking of his adventures creating a lightbulb: I haven’t failed, I’ve simply found about 2,000 ways not to make a website.