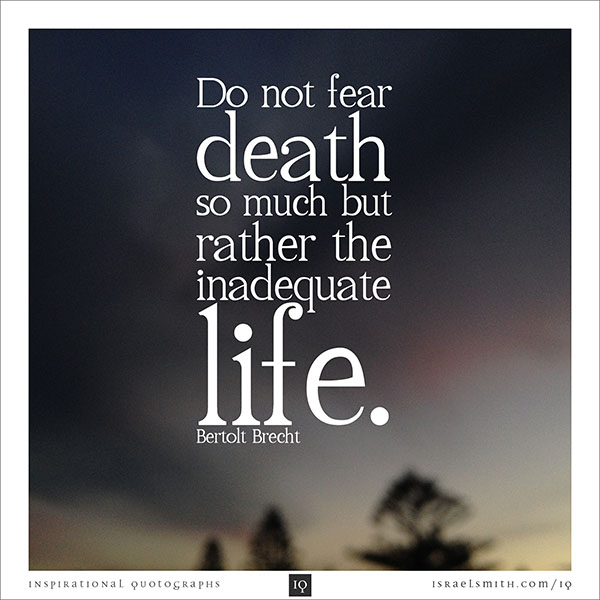 Do not fear death

“Do not fear death so much but rather the inadequate life.” – Bertolt Brecht

Today I attended the funeral of my Uncle. I knew him most of my life, but distantly; someone I’d see at large family get-togethers for a quick chat here or there. Despite this, I always had fond memories of him. Uncle Vic was a typical larrikin – always telling big, exaggerated stories, or laughing loudly at some mischief he concocted. Sadly, last week he suffered a major heart attack and died aged just 56.

Two things struck me about today:

Firstly, his funeral mass FILLED the Catholic Church at The Entrance, where I attended primary school and grew up. There were people standing outside the back doors, watching and listening to the service. He made a massive impact on the community in which he lived, and was well loved by everyone – far more so than I ever imagined or realised. I was actually very surprised, because I had no idea he had made such a large impact, to have filled the church at The Entrance with his mourners. It made me reflect that I perhaps ought to have learned more about him, and spent more time with him while he was alive.

Secondly, I was struck by the comment one of my cousins – one of Vic’s sons – made to me as we shook hands at the buffet table afterwards at the wake. “It’s a shame we couldn’t have caught up under better circumstances.” Funnily enough, I had the same thought myself, while sitting in the church service and looking at relatives I hadn’t seen since the last family funeral. Granted, some of those are from Western Australia, but still, there were others who live locally whom I rarely see except for weddings and funerals.

I am still working through the lessons of these two points. Essentially, I have learned to seek to know more about my family while they’re alive – because finding out how interesting/funny/generous/creative/adventurous/etc someone is after their death is a tragically lost opportunity for connection and love and learning. I have also learned to stay more proactively in touch with the people I love, more regularly than simply at deaths or marriages.

It doesn’t take much other than a phone call and a calendar, and a solid commitment to a date to see each other. And the reasons for catching up don’t need to be anything more than “because we’re family/friends, and I value you in my life”.

And as for today’s quote? Self-explanatory, really. Make the most of your life while you’re living it. Make an impact so profound that once you’ve gone, the church is filled to overflowing with people whose lives you’ve touched. Spend time with the people you love, have the adventures you want to have, and do the work you feel compelled to do – NOW.

As a starting point, think about someone in your network who you would like to get to know better, and have more present in your life, and then commit to making plans with that person in the next two weeks. I will too.