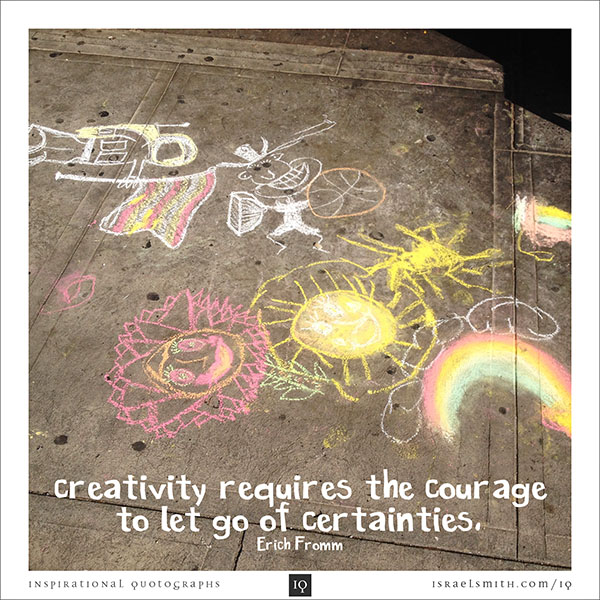 Wow, how long have you got?

There are so many slices to this quote that I want to explore. But first, I want to tell you a story.

Easter Sunday, 2014. My children wake around 6am, and jump on the bed in a burst of excitement because “the Easter Bunny’s been!” After a breakfast of chocolate and a quick shower, we walk down to a local café (Square Peg) for proper breakfast (ie something other than chocolate).

While we were waiting for our takeaway coffees and egg-and-bacon-rolls, the kids grabbed some of the proffered jumbo chalk and started drawing on the pavement. Because this 4-day long weekend has been a bonafide holiday (ie ZERO work) for me, I knelt down with them and started drawing too.

I noticed something about how the kids created. They started drawing anything in whatever colour they had. There was no agonising over what to draw, or how, or whether it would work out, or what colour they should start with first. They simply started, and once they had drawn something, then they figured out what it was going to be, and followed it through.

My son started drawing squiggles in yellow, which then became a circular shape, which then became “the sun”. Indrani started with an orange circle, which was then embellished with pink zig-zags, which then ultimately became a girl with a flower hair-do. Followed by a rainbox, with clouds and a pot of gold (sadly just out of shot) and a beaming sun.

I started with another orange circle, which became a basketball, and I used two black gum-stains and a circular squiggle my son left behind, to form a new face, and a person for some reason wearing a cowboy hat, carrying a briefcase, clicking his heels in the air, with a faceful of pearly-whites. Followed by an astronaut which started as some wavy lines, then became a flag, then became a spaceman planting the flag for who-knows-where on this part of Coogee’s footpath.

Later we were on the sand, and we started digging in the sand. I tell you, if you want to learn about uncertainty, build sandcastles with a 3 year old. There’s no actual certainty that the sandcastle will survive more than about 17 seconds, let alone become part of a superstructure including turrets, castle walls, a bridge, a tunnel, a road for his toy car, or even a swimming pool. Our son’s idea of sandcastles is: Something to jump on as soon as they’re completed.

I was able to finish a tunnel with an overpass, and I have to confess, I felt such joy and took such pride simply shaping the sand with my hands. It was the sweet joy of pure creation, and seemed even sweeter knowing there was no future for the artwork. It was created using my best skills as a sand sculptor, and just when it looked its best, my son and daughter decided to squash it and collapse the tunnel. C’est la vie.

Here’s the takeaways I gleaned from a cafe breakfast and sandcastles:

1) There is so much to be gained from simply STARTING. Just start. And do it NOW.

2) As my man Erich says in today’s quote, with creativity, there are NO CERTAINTIES. Some art works. Some doesn’t. But you need the courage to have a go regardless.

3) There is JOY in creation. Pure, unbridled, sweet joy.

Start, let go of certainties, and embrace the joy of creation.

That will probably do for now.