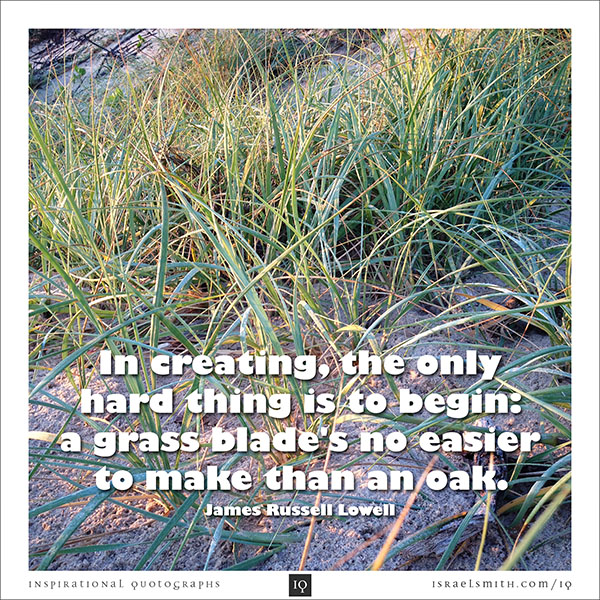 “In creating, the only hard thing is to begin: a grass blade’s no easier to make than an oak.” – James Russell Lowell

So it is in every creative undertaking in life. The challenge is to begin.

Not to say that there are no other challenges to be found throughout the process of creation, but the simple act of beginning is often the biggest hurdle to overcome.

I googled James Russell Lowell, to see from whence this quotation had come. It would appear he was a poet who lived during the 19th Century, and held several official roles in his career – from newspaper editor, to professor of languages at Harvard, to various political roles as an ambassador.

What I found most interesting is how his Wikipedia entry (and presumably other historical entries concerning his life) was focussed around his creative output as much or more so than his employment.

What does this tell us? When we leave behind this mortal coil, those who remain are touched only by that which we create that survives us. Most often, what we do as paid work, or as employees, is nowhere as significant a part of our legacy as our artistic or creative works.

Many artists are also employees – but we remember their art, not that they stacked shelves, waited tables, or held steady corporate jobs.

So, getting back to today’s quote. BEGIN. Make your art. Leave your mark. Don’t stress about the corporate gig, or the income, or the mortgage. Pay the bills, sure, but pour your soul into something creative that will live after you die.

What do YOU think?