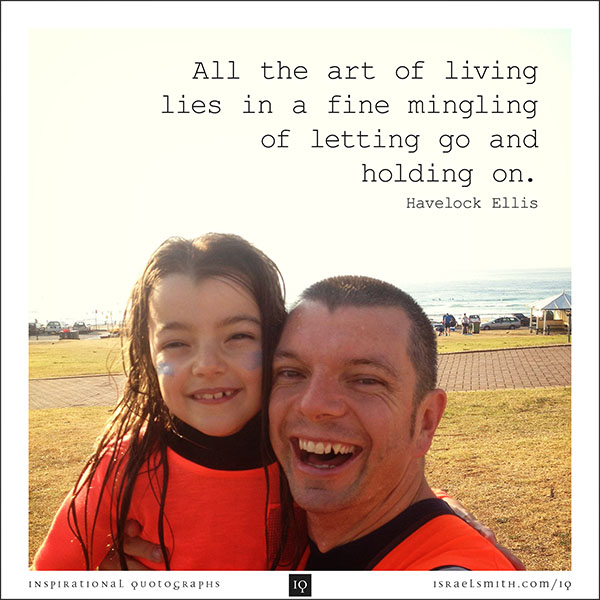 “All the art of living lies in a fine mingling of letting go and holding on.” – Havelock Ellis

I started writing this post about a year ago. I was in Crescent Head, surfing my butt off, and hoping – some may say pushing – for my daughter to start surfing with me, on a new board that Santa brought her for Christmas.

Here’s what I wrote last Christmas:

Sometimes it’s really hard being honest. Even more so when the person you’re being honest with is yourself.

I have been trying to teach my daughter how to surf for the past week or so on our summer holiday. Occasionally Indrani has been a willing student, but mostly I have a litany of refusals ranging from “maybe later” to “I’m just not feeling like it today, Dad.”

After what seemed a promising start to the day today, my daughter Indrani was willing to have a go, and try catching some waves. Once we were at the beach however, board in tow, it was a very different story.

Her reluctance degenerated into an argument between us, and I found myself frustrated to the point of almost throwing the board away.

I gave up, and told my wife “I don’t even care if she ever learns to surf. I just don’t.”

They my wife delivered a classic one-liner that made me stop and think differently about the situation:
“Maybe you’re making this more about you instead of about her?”

I went for a walk and had a swim. I did some thinking. I realised that my wife, as usual, was 110% correct, and had called me on the very reason my daughter was pushing back. It was all about my desire to have a daughter who surfed, rather than about whether my daughter even wanted to surf at all.

So, hesitantly, I walked back to the sand where Indrani was playing with my wife and son.

I asked Indrani to come sit next to me, and listen carefully. I explained that what I was about to say was important, and very hard for me to say.

I confessed to her that I was making the surfing thing more about me and my timeline instead of about her. I explained that I’d simply sit back from now on, and let her figure it out when she wanted to – if she wanted to.

I cried as I was having this talk with Indrani. It’s not uncommon for me to tear up when I am emotionally connected with something. In this case, I think it was partly about realising how much I’d wronged Indrani, but also partly about my ego dealing with the cost of simply letting go and letting her be her own person.

After I’d finished speaking (and crying) Indrani leaned across and gave me a hug, and then I took a walk along the beach to a spot where I could sit and cry it all out on my own, without bothering her or anyone else.

Being so brutally honest with myself to get to this point really hurt, as did letting go of my attachment to her surfing.

The upside is that my actions have created a new space between us, where Indrani feels free to tackle surfing in her own time, at her own pace.

Later the same day, for example, she went for a paddle with my wife, each of them on their own boards, and Indrani practiced standing up on the board – all of her own volition. (Precisely what had caused the argument in the first place.)

Being honest is hard at first, but the payoff is priceless.

Now it’s almost a year later, and Indrani’s surfboard has been collecting dust in the garage from the moment we returned from Crescent Head.

This morning, however, Indrani came with me to “Fluoro Friday” – a weekly get together run by the mad One Wave crew, which is all about having fun, surfing in zany fluoro gear, and getting through a funk. (“Funk” is loosely defined as anxiety, depression, bi-polar, or any other form of “downer, man”.)

The catalyst of this breakthrough was the prospect of meeting other girls her own age at the event. And the fact that there is a distinct “fashion” element, with the fluoro clothing.

The real genesis of this moment, however, came almost twelve months earlier when I wrote that piece above.

And in letting go, I’ve been able to hold on to my girl, and experience one of my proudest Dad moments – when Indrani caught her first wave all the way to the beach. (Not standing up, but that’s another “letting go” I’m working on.)

I let go of my attachment to Indrani’s surfing, and when she was ready, she willingly and enthusiastically started surfing. She had her outfit chosen almost a week ago, and we laid it out together on her bed last night. After a late night, I forgot to set my alarm, and Indrani came into my room at 6:01am saying “Dad! Fluoro Friday!” Excited? Nah, not much.

When she hit the sand today after her first awesome wave, Indrani jumped off the board and started jumping up and down, pumping her arms in the air with excitement.

Havelock has it true. All the art of living lies in a fine mingle of letting go and holding on.