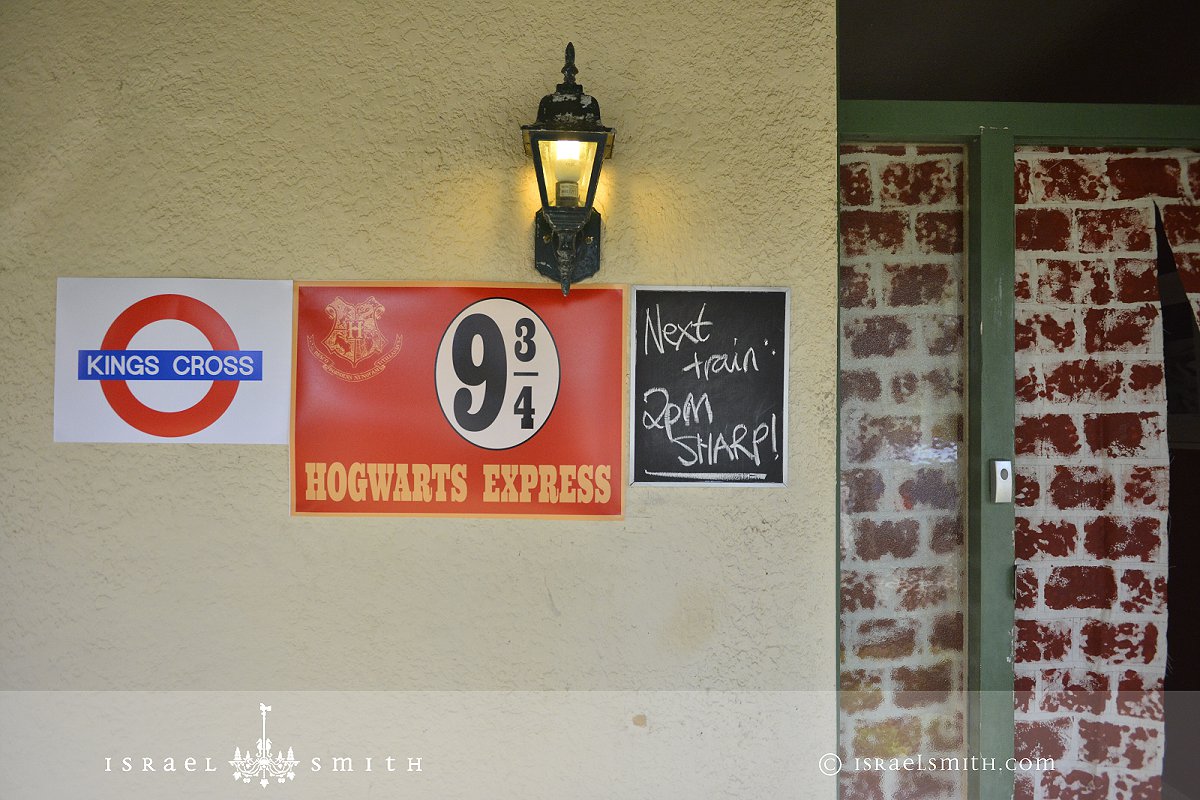 Every birthday in our household is special, regardless of age. Suffice to say you wake to banners, balloons and streamers. There is always a home made birthday cake. We even have a rule that you don’t have to go to school or work.

But every 2 years, birthdays get a whole lot of extra special attention. You get a special themed birthday party – your choice – with friends invited. For our gorgeous girl, Indrani’s 7th Birthday, she wanted a Harry Potter Birthday Party.

For weeks and weeks I researched how to make a Harry Potter extravaganza. I googled and scoured Pinterest every night. I was looking for ideas on invitations, props, foods, cakes and activities. Indrani had been talking about her birthday party for about 6 months, but she was beside herself with excitement when I finally sat her down and said it was time to get planning. I showed her all the ideas I had pulled together, and she got to choose her favourite things from each category. The proviso: she had to help make everything.

So after weeks & weeks of research, we embarked on weeks and weeks of doing craft.
Every. Single. Day. After. School! Then more on the weekends too.

Suffice to say, all the effort was worth it. Take a look below at Indrani’s 7th Birthday Harry Potter Party Photos and see for yourself how much fun was had.

(ps. I should say a special thank you to Israel for taking on Indrani & my ideas, and using his design skills to make the invitations, signs, potions booklet and more – you’re the best!).

The Invitation
Each witch and wizard received their very own letter from Minerva McGonagall along with a train ticket for Platform 9 & 3/4 for the Coogee to Hogwarts Express. The envelope had the Hogwarts Crest & was post marked “Owl Post”, and the back sealed with a red wax ‘H’.

Setting the Scene Upon Arrival
From the moment the Muggle Parents dropped their witch or wizard off, we wanted them to experience the Harry Potter Theme. 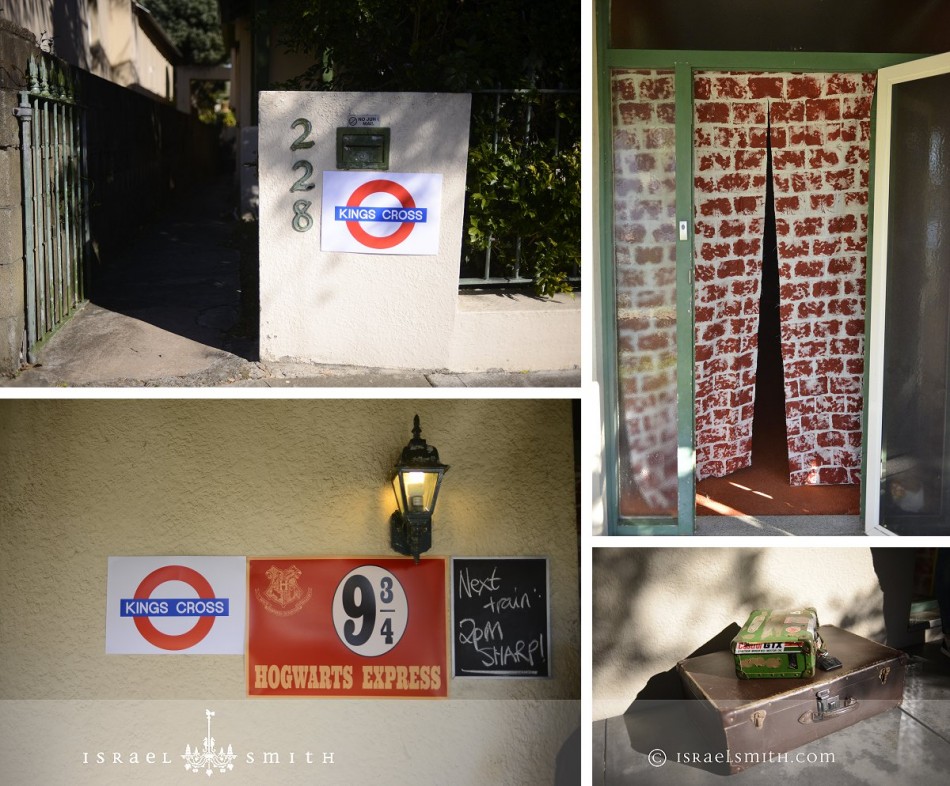 Jessie, Indrani’s Guide Parent was the ticket conductor for Platform 9 & 3/4. Upon entry to the long hall, there were owls and tea lights setting the scene. 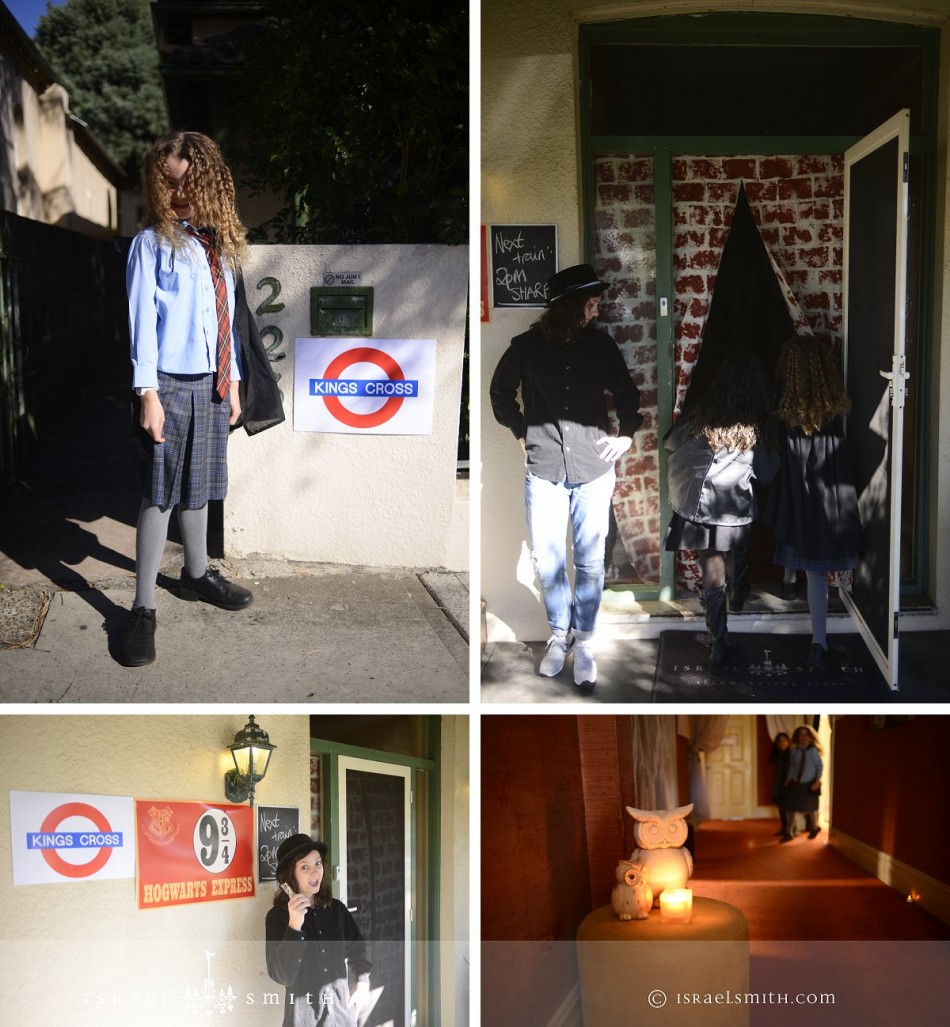 Wand Making Class
The first activity was a visit to Ollivander’s to make their own wands. 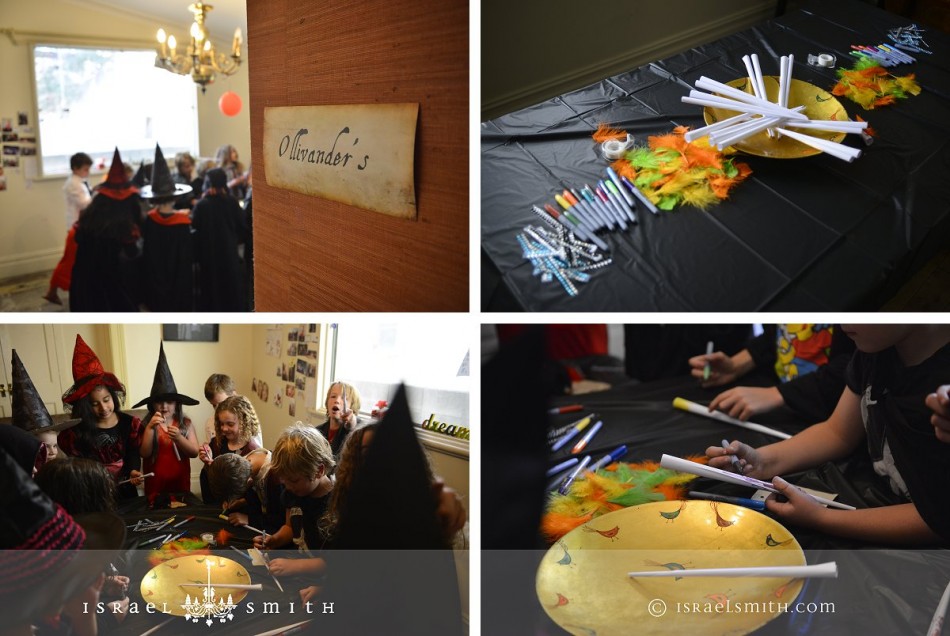 The Transfiguration Photobooth
We had group photos, then each witch and wizard got to clown around on their own. At the end of the day, they received their own Wanted Poster. 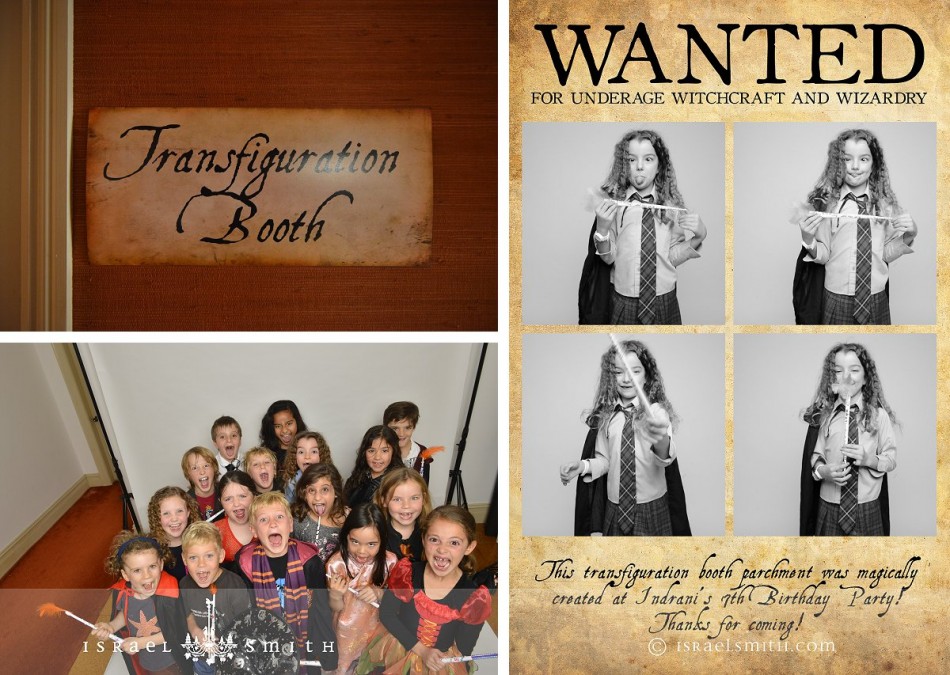 Hogwarts Feast
I made a green smoothie of banana, strawberries and spinach as the Polyjuice Potion. It was a huge hit, because it really is yummy – seriously it is. There was also Butter Beer, a sickly sweet concoction of Creaming Soda, Ginger Ale & Butterscotch Syrup. There was much excitement over the Butter Beer because it was fizzy. The food was pretty healthy & I just gave them names to suit the HP theme. I also made Troll Eyeballs (tiny meatballs with an olive circle stuck on top) but these were all gone by the time Israel got to take these photos. 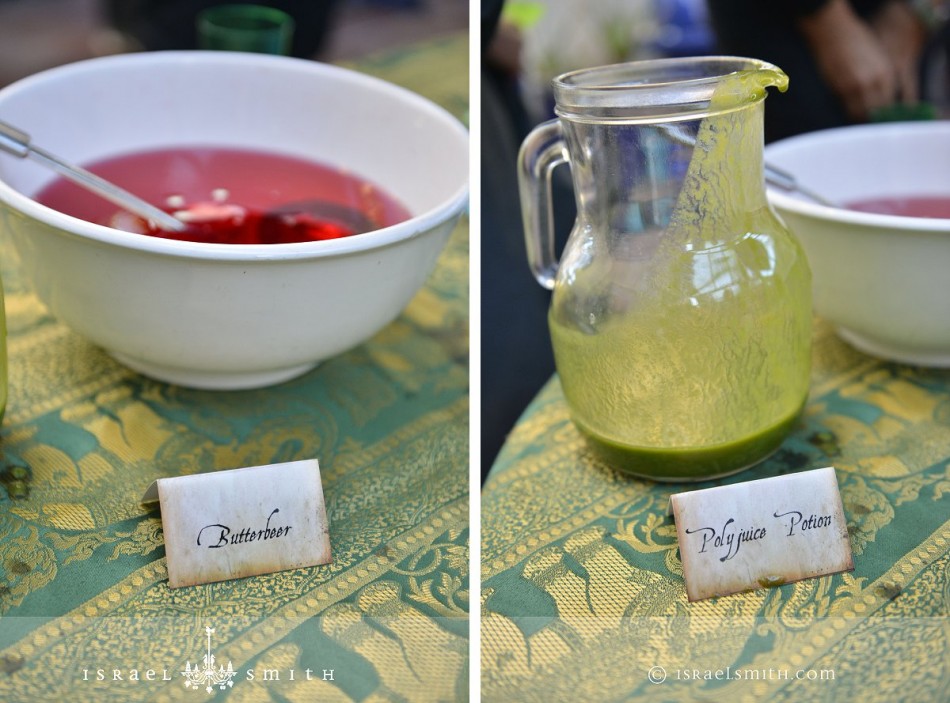 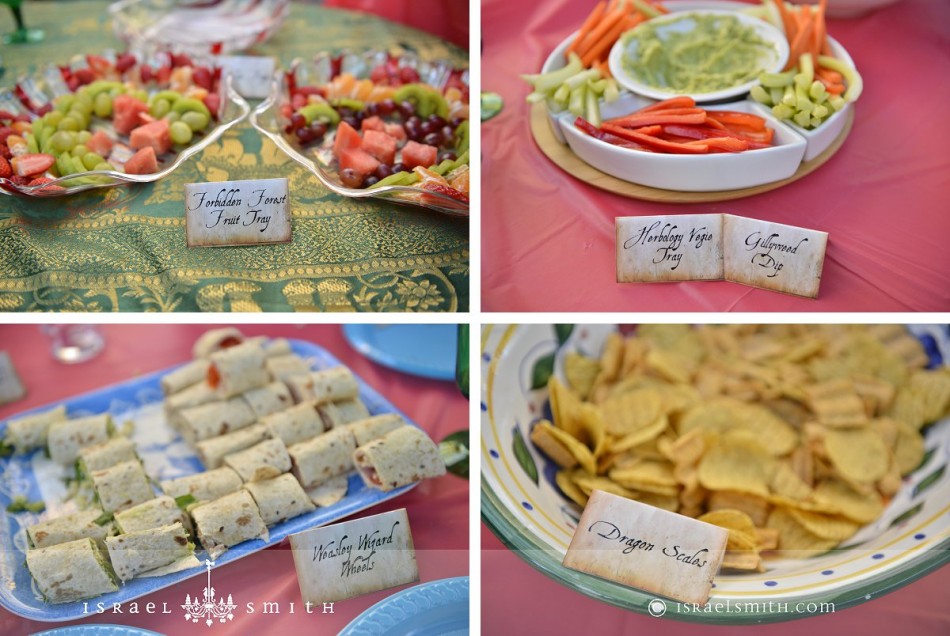 Potions Class
My beautiful niece, Natalie ran our potions class. Each witch & wizard were given their own Potions Handbook and had to follow instructions to make their potions. First up, they made Magical Critter Lanterns that glowed in the dark and then an Exploding Elixir. There was one other Potion in the Handbook for them to try out at home. 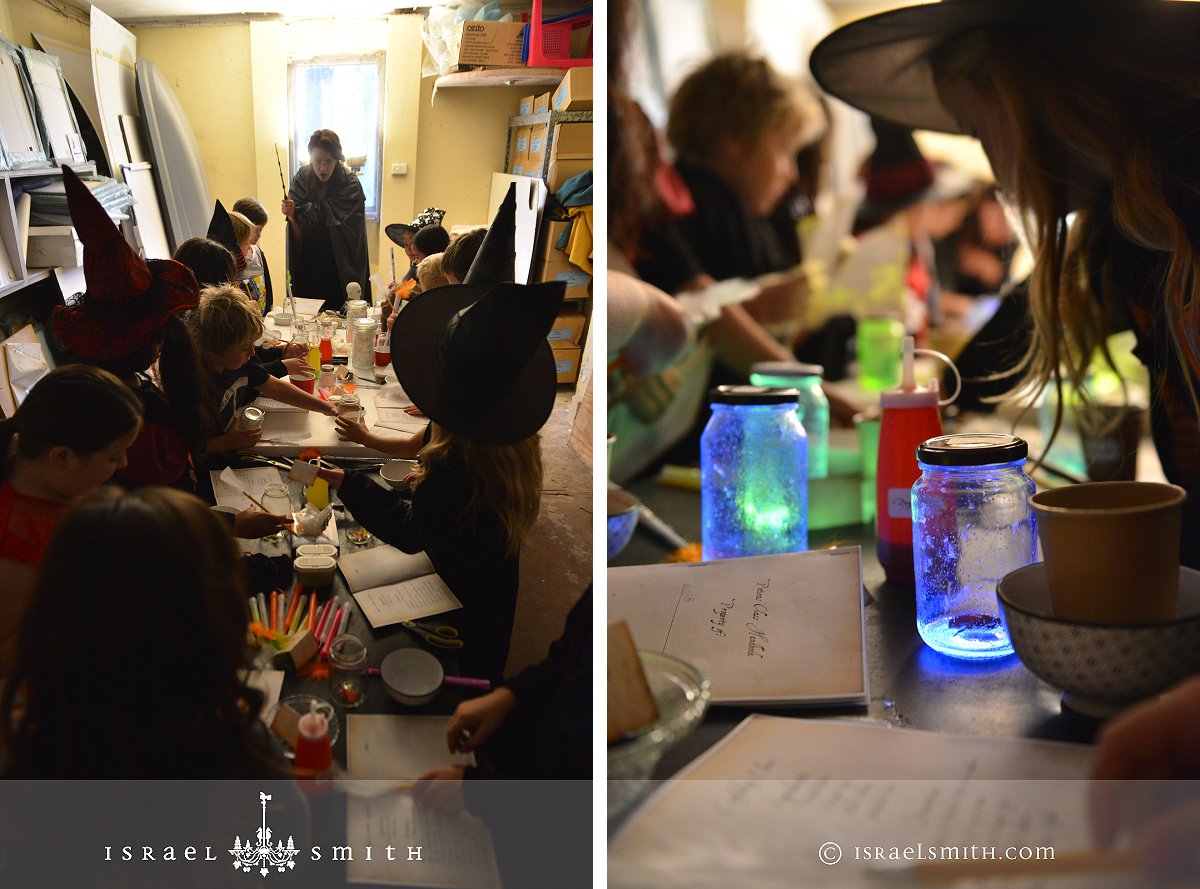 I just love the look on Indrani’s face here as her Elixir Explodes. 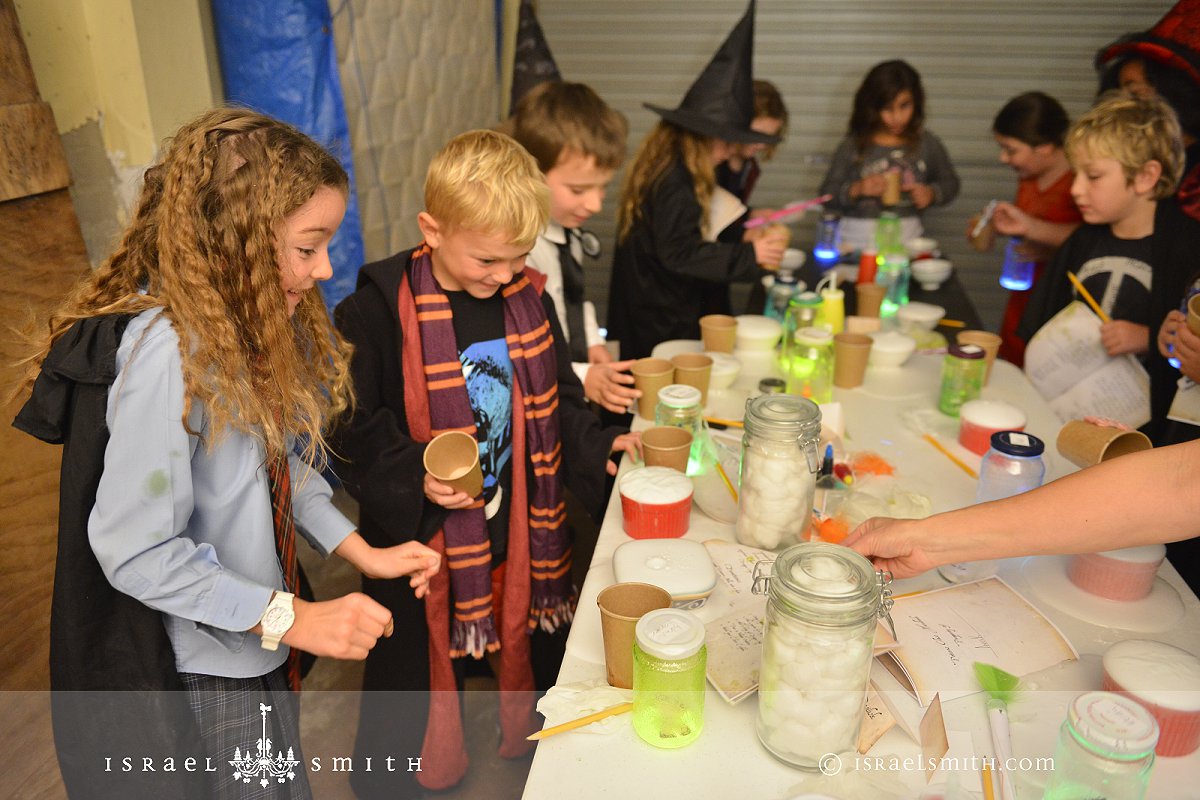 Quidditch Match
After potions, we went down the back yard for a game of Quidditch. Everyone got to choose their own brooms and were then split into 2 teams. Like quidditch, the aim was to get the quaffle through your teams hoops and there was also a snitch to found. 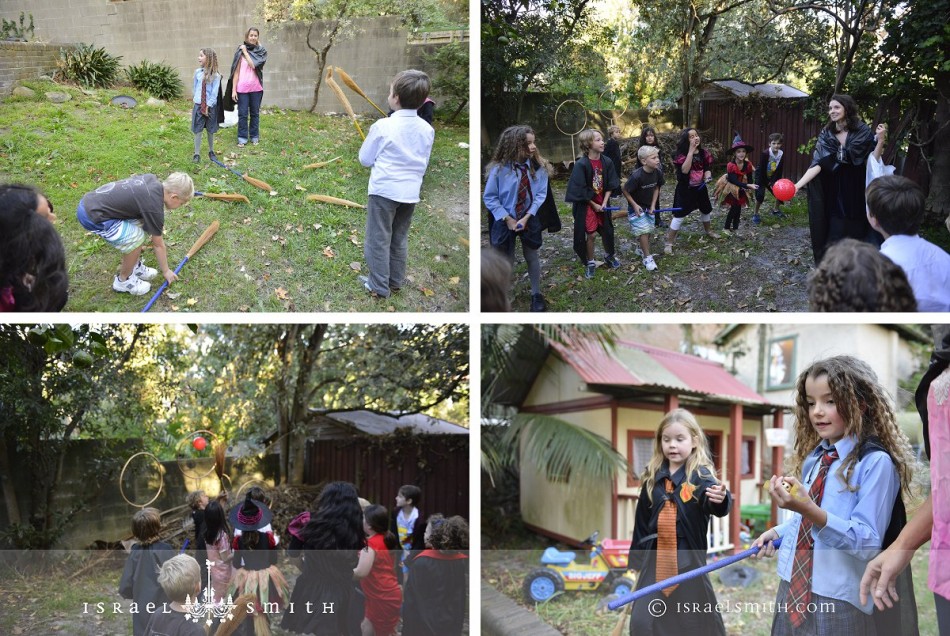 Time for Cake
After all those Potions and energy burning playing Quidditch, it was time for more food in The Great Hall. You can imagine what ran through my head when Indrani chose to have a Monster Book of Monsters cake. Arghhh… In the end, it wasn’t too hard because an amazing mum had posted a tutorial of how she made her Monster Book of Monsters cake. But it was a labour of love getting the icing to look like fur!
We did have black plastic hanging up as the ceiling, and had strung up floating candles made out of toilet rolls painted white (by Indrani) and glued in cheap flickering battery operated candles but didn’t get photos of this.

Honeydukes
Before it was time to go, we opened the doors in our loungeroom to reveal Honeydukes. So up til now, the party had been relatively low on the sugar front. Hello! Our witches & wizards went nuts in Honeydukes. Not everything at Honeydukes was sweets though. I had made Exploding Green Frogs (green frog shaped soaps that when put in water, red ‘gut’s oozed out) and stunned frogs (plain old plastic frogs from the $2 shop). 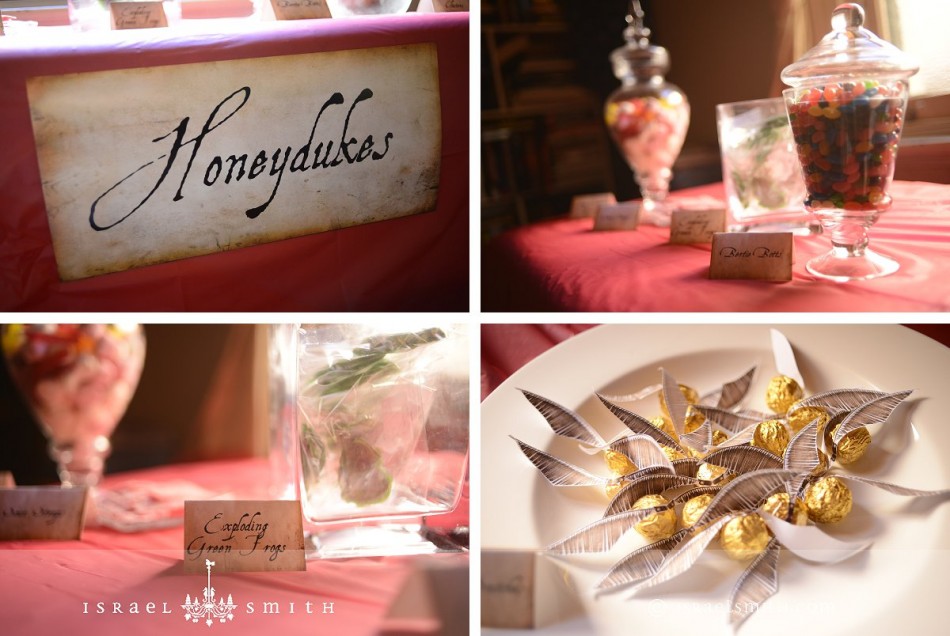 Hedwig Take Home Bag
Other than a bit of help cutting out the circles, Indrani made these all on her own – and she told everyone about that too:-)
The bags were packed with goodies from Honeydukes,  DIY Harry Potter Glasses, their Wanted Poster from the Transfiguration Booth, a Daily Phophet which was actually a thank you from Indrani, the wands and the Magic Critter Lanterns they made. 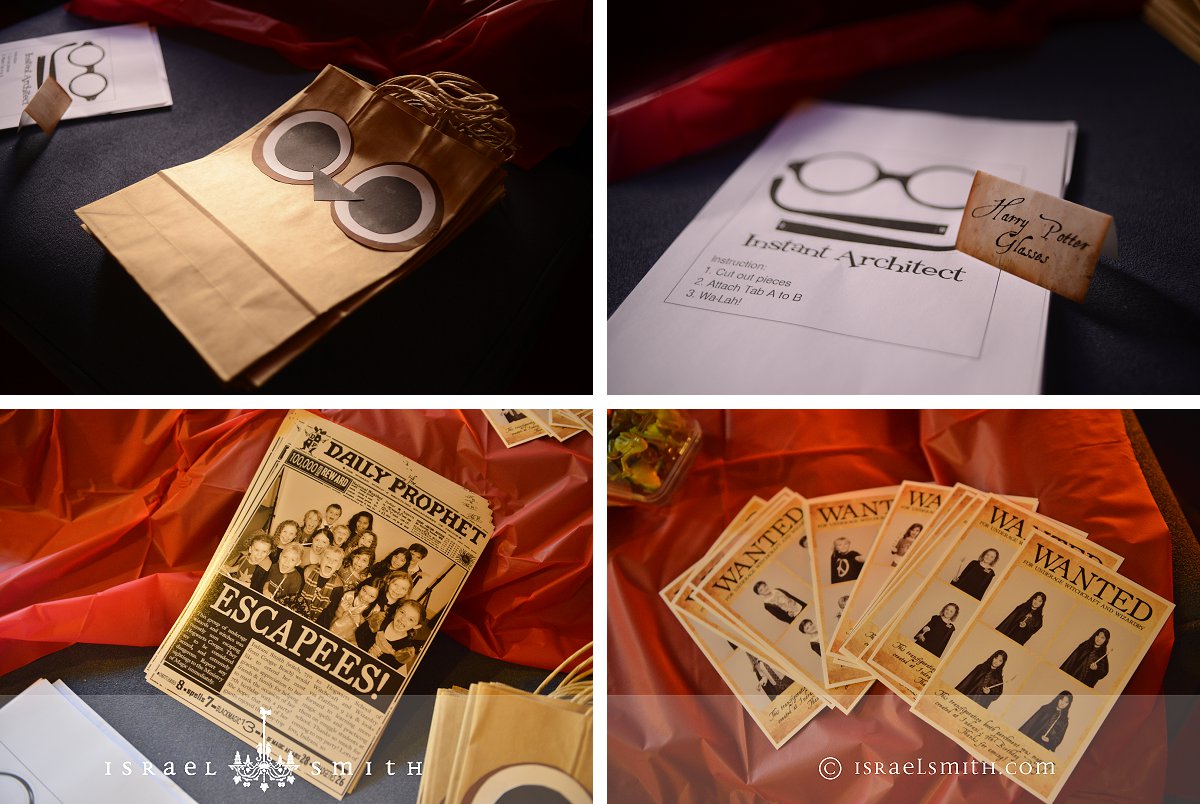 We could not have asked for the party to go any better than it did. By the level of noise coming from our house for those 2 hours, it’s pretty safe to say the witches & wizards enjoyed themselves. Thank goodness we now have another 2 years to recover before the next big party for Indrani.
Btw, if you are interested in hosting a Harry Potter Party, we have kept the templates, signs, props etc, and are looking to sell them. They are so beautiful and made such an awesome party, it would be a shame to throw them away. Please email Belinda if you are interested.